The Jogo Bonito of Parramatta Park is dead. It seems Popovic is done with the FFA Curriculum’s 4-3-3 (albeit in a 4-2-3-1 at most times) and playing out from the back. First chance we got at the FFA Cup Round of 32 match vs Wellington Phoenix saw a long ball played straight up to the big #9 Riera.

He’s good at it when he pushes back against the defender and brings the ball down on his chest, runs onto it, or even flicks it on to a team mate. The guy has air but it wasn’t used as an element of surprise. Rather it was the only consistent way forward in the game. What happened to playing out from the back?

Janjetovic on numerous occasions, if not all, pushed his wing-backs up the field and opted not to play the short one and work up the park with constructive build-up. Instead we opted to “throw it in the mixer” as one pundit said. Looks like there’s a new game in town and Carrasco better get used to it. So much for progress.

The long ball is back! 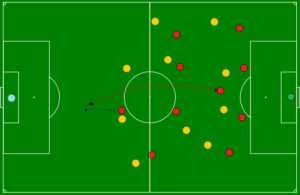