Previously: N3lly Y0a had a convincing victory over the Music during Corners and Goalkicks outrage. Malcolm Conn scored a stoppage time winner to edge out Optus World Cup debacle by 1 sole vote. A place in the final awaits. 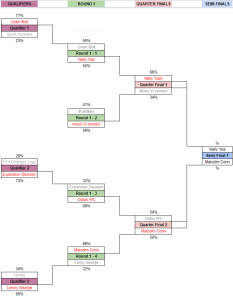 Best of #sokkahtwitter Semi Final 1.
A place in the final awaits:
N3lly Y0a
vs
Malcolm Conn

Read about them here: https://t.co/cZ2motQEsU