The Best of #SokkahTwitter 2018 – Round 1-7
An unprecedented Triple Threat for a place in the Quarter Finals.

Previously: #TimmyTime and Bozza Proposal couldn’t be separated. 50/50 split, even votes. Instead of us deciding which goes through, we’ve opted to put them both in Round 1 and let #SokkahTwitter decide the Quarter Finals with a third contender: SLowy throwing his toys out of the pram. 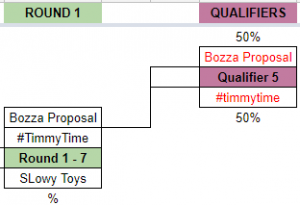 Read about them here: https://t.co/CXYYh5xVhz
There can be only one this time, so get voting!

SLowy Throws Toys Out of Pram

In August 2018, Former Chairman of the FFA Steven Lowy held a press conference on 2nd October 2018 to express his disdain at democracy and fear monger over the “bad old days” returning. He stated he would not put himself up for re-election in November all the while taking shots at everyone in the football community for wasting the FFA’s time in trying to get better governance and blamed the entire saga over the lack of progress on the professional game, 2nd division and any potential promotion/relegation.

His entire statement can be viewed here where the hyprocricy is there for all to read.

The Chairman of Football Federation Australia (@FFA), Mr Steven Lowy AM, has announced he will not seek re-election. Read his full statement. https://t.co/PqR3JXPYY0

In November SLowy reiterated he wouldn’t be putting himself up for re-election and refused to accept the outcome of the votes for a new Congress.

Statement from the Board of Football Federation Australia: https://t.co/fI3285LFp9 pic.twitter.com/4kzyPwpYbo

Bozza doing Bozza things and proposes to his partner via Twitter. xmb

Despite barely 60 minutes of play time all year, Mainstream Media called for #TimmyTime at the World Cup to save our hopes and dreams. It become apparent that many “World Cup fans” and media don’t actually pay attention to football throughout the year because the calls for Cahill to start at the World Cup were ignorant of his form and game time for the past year or so.
https://twitter.com/search?q=%23timmytime&src=typd