Previously: Lucy Zelic pronunciation outrage edged out the VAR in a very close contest. Now Lucy faces one of the favourites of the competition in Round 1 – Sokkah Shazza. 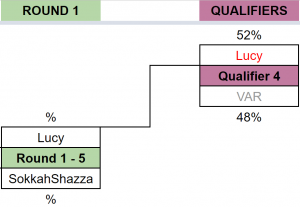 Read about them here: https://t.co/vfXfEskKDK

Lucy Zelic signed up to host one game a day in Russia. She ended up having to host every game because of the Optus disaster. Viewers who don’t watch football except during the World Cup began criticising Lucy’s pronunciation of foreign names, saying she was trying too hard. It was more of a case of fools who couldn’t speak another word of a different language criticising someone who can and takes the effort to pronounce player’s names showing dignity and respect. Also probably because she’s female.
Other “MSM” media outlets even attacked Lucy for some reason but #SokkahTwitter would have none of it:

Thank you #SokkahTwitter for punishing this terrible take #ratio pic.twitter.com/wq9elNGZO3

The football community rallied behind Lucy and Craig Foster even had to come out and defend her. It was all so ridiculous and another one of those “faux outrage” moments by the masses.