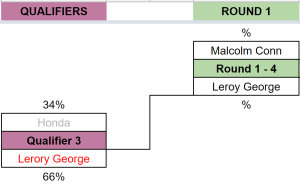 Who could forget cricket's Malcolm Conn laying the boot into football (strewth!!) and then 2 weeks later the cricket ball tampering saga.
Vs
Lerory George Pussy season

Former Melbourne Victory import Leroy George gave an interview to Vice Sports in the Netherlands where he ridiculed various aspects of his former team and the A-League in general.

The main quotes from the article were:

“I ended up with Melbourne Victory through the playoffs champion. In the regular season we ended up as number four with more than twenty points less than the number one. You can run a pussy season in Australia and then still celebrate a championship. “

“The party was certainly no less. Those guys there know how to celebrate a championship. We only celebrated for a week. Crates of beer in the locker room, steps, and more of that sort of thing. Those teammates of mine have been serving the whole week. I sometimes drink something myself, but what those Australians do is really next level. Those guests were in the drink from 10 o’clock in the morning.”

“Life in Australia was further super-relaxed. I usually went to the club at nine o’clock in the morning and then we started training at ten o’clock. Around twelve o’clock I discussed with my teammates what we were going to do in the afternoon. Often it would be nice to have lunch and drink coffee. Then I took a nap and it was already evening. I then sent an app to my teammates: “Where are we going to eat?” That was the life in Australia pretty much. Nothing wrong with that.”