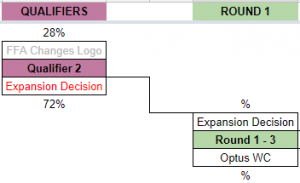 read about them here: https://t.co/GJcLmeveuM

Finally. Expansion. The old FFA board kept delaying it and then announced they will let the new FFA board decide what to do with it. The new FFA board decided to go ahead with expansion and after more delays, announced Western Melbourne Group and Macarthur South West Sydney as the 2 new team. Trigger Twitter meltdown as everyone had their say in whether it was the correct decision in terms of the teams chosen, their staggered approach and why other teams should have been included instead.

Optus had a massive fanfare leading into the World Cup of what they were offering to the public during the tournament. $15 a month, all games live and on demand. Heaps of content outside of the games. The future looked bright. And then Match Day 1 happened. The servers crashed. No one could watch the games. If they did, it buffered constantly.
Optus assured that they would fix it for the next round of games, but people were still experiencing major problems. SBS started showing all the group stage live to help alleviate the pressure on Optus.
The Prime Minister at the time Malcolm Turnbull got involved and made Optus look bad and demanded SBS show all the games (despite his Government reducing SBS’s funding in the first place which forced them to sell the rights). Eventually all games were shown on SBS alongside Optus’ offering. It was a PR disaster for them and the outrage was heard across the nation across generations hating on internet related content and demanding that all games should always be on SBS. SBS came out looking the heroes and Optus have only just now started to recover from the negative feedback.