The Best of #SokkahTwitter 2018 – Round 1-1
Round 1 begins and this is where it gets competitive. 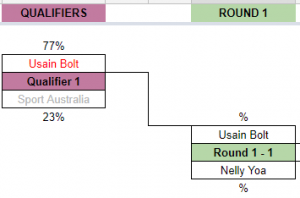 Will Usain Bolt achieve his dream of playing professional football? The Central Coast Mariners offered him an extended trial to help the Olympic Champion achieve his dream.
Every week we heard how Bolt was “getting better and improving” basic football skills that kids learn when they’re 6. Thousands paid admission fees to watch him either come off the bench or start against made up teams of amateur players. One of these teams even let him score twice which made headlines around the world – all thinking he scored in the A-League against a real professional side.

The entire pre-season was focused on Bolt and when it came to crunch time of contract negotiations, Bolt’s dream of playing football had a price tag of $3 Million a season, which would make him the highest paid footballer in Australian history. Laughable. No third party came to the table to front the cash and Bolt left the Central Coast on the eve of the season.
CCM have the worst start in A-League history, so now some are wondering if they should have signed him…