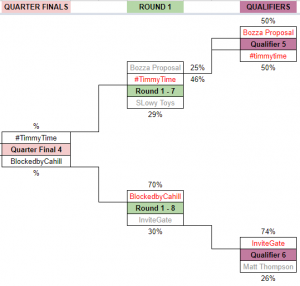 Final Quarter Final for Best of #SokkahTwitter 2018
Its a Tim Cahill DERBY!!#TimmyTime – media calling for Tim to start at the WC
vs#BlockedByCahill – FFA requests photos for #thanksTim and got spammed by everyone being blocked

read about them here: https://t.co/bjnY7rxicz

Despite barely 60 minutes of play time all year, Mainstream Media called for #TimmyTime at the World Cup to save our hopes and dreams. It become apparent that many “World Cup fans” and media don’t actually pay attention to football throughout the year because the calls for Cahill to start at the World Cup were ignorant of his form and game time for the past year or so.
https://twitter.com/search?q=%23timmytime&src=typd