Previously: Lucy Zelic fought to the end but was edged out by SokkahShazza who moves on to face Charles Purcell who go ratio’d to death but knocked out the ongoing FFA Congress.
Final 4 is shaping up. 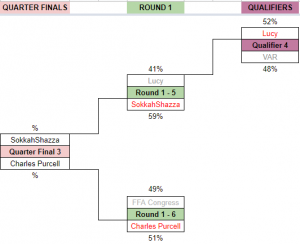 Quarter Final 3 of the best of #SokkahTwitter 2018.
Big match up ahead:#SokkahShazza
vs
Charles Purcell who got ratio'd to death after writing a piece about why Aus shouldn't bother going to the WC

Read about them and remind yourself here: https://t.co/KvRlmO0Kvz

Some unknown “writer” who states he doesn’t like soccer writes a troll article on SMH with a headline “World Cup: Why does Australia bother?” asking why Australia even bothers qualifying for the World Cup if we are always going to lose. I’m not sure anyone read the entire thing because it was absolutely stupid clickbait rubbish.

Here is his ridiculous article if you want to give him hits.

Hard to even find a trace of him now on Twitter:
https://twitter.com/search?q=charles%20purcell%20%23sokkahtwitter&src=typd