Previously: The Optus World Cup debacle defeated the A-League expansion decision comfortably. Malcolm Conn (strewth!!) had a similar result against Leroy George and his pussy season.
They now face off for a place in the Final 4. 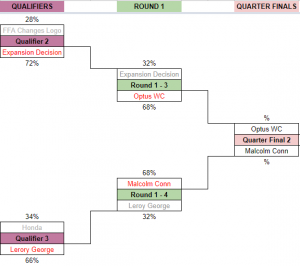 Read about them here: https://t.co/tpVcDPYDlE

Optus had a massive fanfare leading into the World Cup of what they were offering to the public during the tournament. $15 a month, all games live and on demand. Heaps of content outside of the games. The future looked bright. And then Match Day 1 happened. The servers crashed. No one could watch the games. If they did, it buffered constantly.
Optus assured that they would fix it for the next round of games, but people were still experiencing major problems. SBS started showing all the group stage live to help alleviate the pressure on Optus.
The Prime Minister at the time Malcolm Turnbull got involved and made Optus look bad and demanded SBS show all the games (despite his Government reducing SBS’s funding in the first place which forced them to sell the rights). Eventually all games were shown on SBS alongside Optus’ offering. It was a PR disaster for them and the outrage was heard across the nation across generations hating on internet related content and demanding that all games should always be on SBS. SBS came out looking the heroes and Optus have only just now started to recover from the negative feedback.