Previously: N3lly Y0a edged our his best mate Usain Bolt by 1 single vote. He now takes on the decision to play music during corners and goalkicks in the A-League for a place in the final 4. 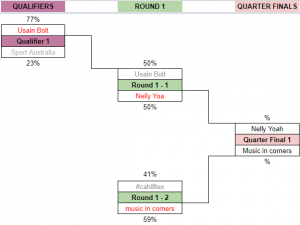 Read about them here: https://t.co/QBgz7BDv3l
and vote below!

Music during corners and goal kicks

Outrageous. FFA know nothing of football culture and turning the A-League into the BBL.
Apparently Head of the A-League Greg O’Rourke was asked a question on how to bring back some atmosphere to A-League games and he said they were working with active supporter groups to try and achieve that. Someone asked him what about the smaller clubs?
His response was that some of the smaller clubs could utilise music during corners or goals kicks and other stoppages. Cue mis-quotes out of context and #SokkahTwitter on the offensive.

“We want to see the return and growth of active fans that have a large boisterous entertaining, standing, singing, chanting culture.” #SBSTheWorldGame https://t.co/2tfeN2X6XF