Welcome to this week’s edition of the Best and Worst series. This time its the first Sydney Derby of the season.
Hit those share buttons if you enjoy reading a Wanderers biased account of things.

Best/Worst/I Don’t Know – Starting XI changes
I think I understand why Mark Bridge started. He isn’t an impact player and perhaps his experience was needed for the derby. Hamill starting makes sense as he has played the last 2 rounds. I figured he’d be our weakest link but he proved me wrong. Jumpei must feel aggrieved that he didn’t start (or feature at all) as he has been decent so far this season. One would have hoped that Bridge was fit enough to last the full 90. He wasn’t, and he wasn’t subbed off at all. The rest of the lineup selects itself. For once we had a decent bench with Jumpei and Santa waiting to make an impact. Unfortunately they didn’t.

Worst – Marry Me Arnie
Sydney FC’s latest tifo references last season yet again. First it was the TL:DR version in Round 2 with a list of statistics that conveniently forgot to mention their loss, and now they unfurl a banner from the top of the stadium of Arnie as a king. I think its a reference to this poster of The Notorious B.I.G but Arnie for some reason has an engagement ring on. Jarred Gillett must have proposed prior to the game and their union was proudly displayed throughout the next 90 minutes for the world to see. Congratulations to the 2 of them. #LoveConquersAll #VoteYes

Best – Risdon + Riera = Goal
I think I’ll be using this heading countless times this season. Risdon again with another perfect cross to Riera’s head who has scored in every competitive game for the club. Riera was merely walking when Risdon had the ball. But once Risdon got past his man, Riera knew it was on. He darted into the box and at the last moment peeled away from Wilkinson. Free header to the far post and it was in. Fastest goal in #SydneyDerby history. Riera is a work horse. He drops deep to win the ball or lay it off to a team mate, then draws defenders in the box. He always teases my “Riera hat-trick” prediction by scoring first. We’ll get there one day.

Worst – Gillett: The Worst a Man Can Get
Popovic lambasted Gillett a couple seasons ago saying we never get the roll of the dice when he is in charge. Gillett has responded many times by proving Popa right. And it continued again in the derby. Apparently it is okay for Bobo to foul Cornthwaite all game and not get a yellow (Bobo had 5 fouls all game, the most of ANY player on the park). Its also okay for Matt Simon to come in late on the goalkeeper and completely get away with it. Its okay for the Sydney FC captain to completely take out Risdon and not get a card for it. It’s okay for Sydney FC to grab and hold WSW midfielders, completely breaking up the play, win the ball and then carry on as if nothing had happened. If a WSW player looked in the direction of a sky blue shirt, the whistle was blown. It was ridiculous witnessing this live, and then when I watched the replay, it made me even more furious. SFC fans can complain all they want about a “non penalty” last year. But we won’t mention all the blatant penalty claims that have been waved away for WSW, Sotirio’s onside goal being incorrectly flagged offside, Ibini standing in front of Covic in an offside position but the goal standing, and all the soft penalties that have been granted SFC since Derby #1. Call me a one-eyed Wanderers fan (this IS a WSW supporter website FYI) but SFC fans need to stop being so blind to all the calls they get favourably every single week. 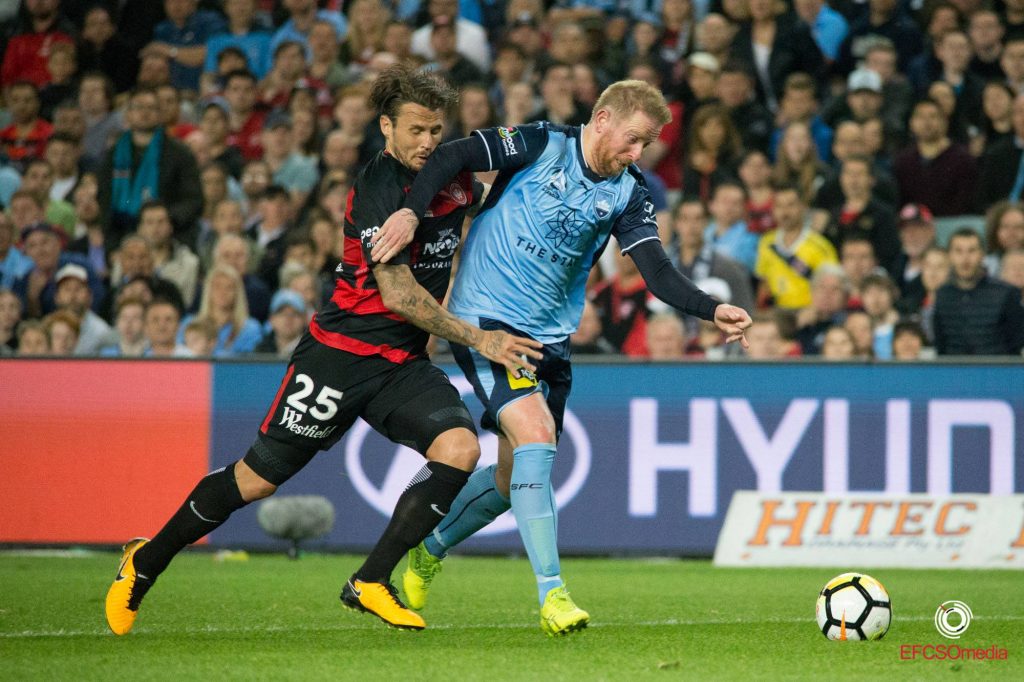 Worst – VARFC
Gillett’s performance was assisted by the inept VAR system. It seems that VAR only works in favour of SFC. It has been that way since its introduction, strangely in the last couple rounds of last season. I was in line with Carney at ground level when he entered the box. I knew it as soon as he got the ball that his only intention was to go to ground and milk a penalty. A few seconds later, I was proven correct. Carney had no intention of anything else. He stuck out his arm to hold off Herd, felt contact and went to ground. Smart footballer for sure, but that happens in the middle of the park and its probably play on. But somehow now commentators are pushing this whole “there was contact” angle. Football is a contact sport. Contact does not equal foul. They went to check with VAR but we all knew the outcome. Riera received a yellow for dissent and SFC had their first shot on goal via a penalty. At that moment I knew we weren’t winning the match. 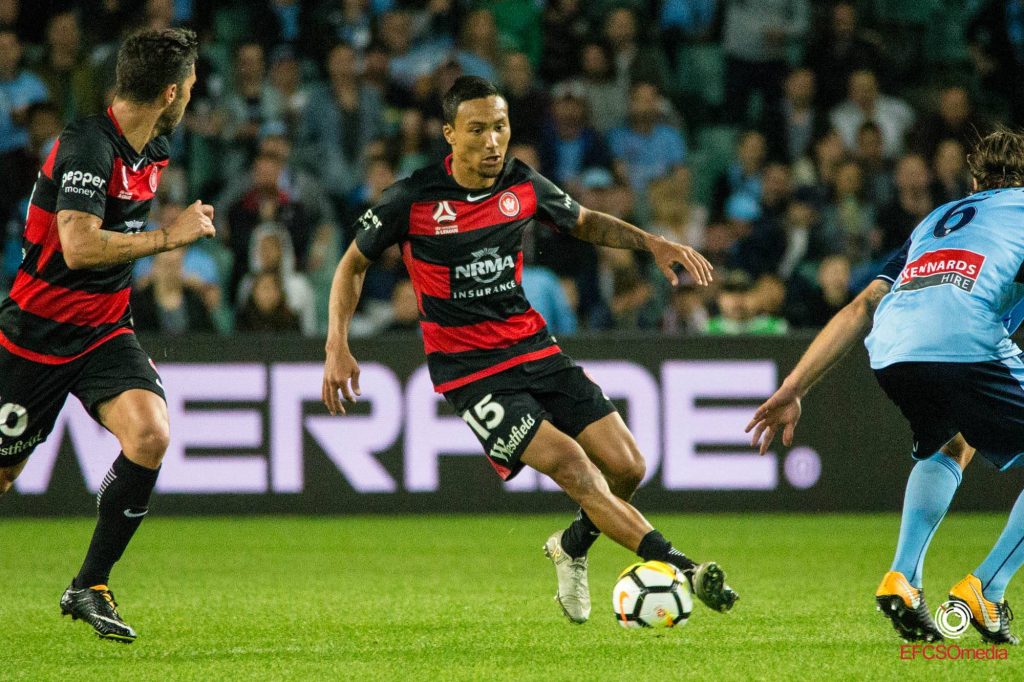 Best – Boss Baccus
Kearyn Baccus has grown as a player since the back half of last season. He is so integral to the midfield of the Wanderers. That first half was beautiful to watch. Baccus would win the ball in midfield or receive it from a team mate and would always play a positive pass. He found Risdon on countless occasions free on the right. He would skip past challenges, or play a few quick short passes with others to get out of tight spaces. His confidence and intelligence as a footballer is growing every week. Herd complements him and together they are formidable. Bonevacia completes the trinity and even the SFC biased commentary were praising the WSW midfield and style in that first half. SFC had nothing and no answers. The Wanderers midfield pressed to win the ball and gave no space to the likes of Ninkovic and when the ball was won, were quick to move it to catch the opposition out.

Best – Hamill?!
All props to this man. Credit where credit is due. The guy has been under fire by WSW fans post ACL 2014 triumph (where he played a major part). Has been used as a makeshift fullback and centreback the last couple of years and has been paired with donkeys who accentuate his faults (Golec, Borda etc – seriously, it took me a few moments to remember Borda’s name…). This season however, I’ve been shocked to see Hamill getting praise from many WSW fans. Was used as a right back in Round 1 due to Risdon being unavailable and he was solid, providing an assist for Jumpei. In Round 2 he had to come in early in the second half due to Thwaite’s injury and was solid again. This week he started as predicted in last week’s podcast over Aspro purely because he has the minutes this season. And he repays that faith with his first ever A-League goal for the club, topped with a Steph Curry inspired celebration in front of the SFC fans. Amazing. Cheekily WSW fans are saying he is on the same strike-rate as Riera but none are slamming his performances this season. Congrats to him and let’s hope he remains consistent the rest of the season when called upon.

Best – Cejudo Fire
I’m always worried about how our players will fire themselves up for the derby if they’ve only just arrived in the country and don’t understand the rivalry between the 2 teams and the historical divide in the city itself. But after this game, I have no doubt Alvaro Cejudo gets it now. He was on the end of some ridiculous decisions and as the game wore on, his temper and fire grew and grew. Surely he’ll use that as motivation to win the FFA Cup semi-final to get another crack at Sydney FC for some silverware. Cejudo was brilliant all game, yet again. For him to run back to his defensive box and make a perfect sliding tackle just shows his determination and class. He isn’t here for a holiday. Not anymore.

Worst – Out-Foxed
Hayden Foxe seems to be able to send a team out from kick-off to get the job done. Until half-time. And then, that is where his deficiencies start to show. Almost unanimously on social media following the game, WSW fans are questioning why Foxe refused to make a sub until the 85th minute. It was clear as day that we needed a change and were on the back foot. Mark Bridge was anonymous for the majority of the match and was playing very narrow. He was gassed and done. Dare I say it, we needed Jumpei to replace him from the 65th minute. His speed and unpredictable nature could have been an X-Factor. Likewise with Santalab. He needs more than 5 minutes to make an impact. We were inept in attack for the last 30 minutes and needed an injection. Santa should have been put on at the 70th minute. With his fresh legs and Jumpei running all over the place, we could have won that match. The reason why Arnie delayed making substitutions was that he had no one on the bench except the hired hitman Matt Simon. We had weapons on the bench that could change the game. Instead Foxe made no adjustments as Sydney took control of the match and ultimately lost us 2 points. He probably was looking towards Tuesday and I expect Jumpei and possibly Santa to start. But one game at a time. That derby was ours to lose, and we almost did.
The sooner the club can appoint a full time head coach, the better. We are still in the top half of the table, but those second half performances are killing us. We need someone who can see our weaknesses and adjust accordingly. Foxe isn’t that man right now.

Best – Still Undefeated
After its all said and done, we are still undefeated this season and sitting 4th.  Sydney scored a contentious penalty and a deflected goal. Next game is against 2nd place Newcastle and a win will have us leapfrog them. We can’t complain too much, but a part of me feels its purely the talent alone that is getting us the points and these performances. The tactical changes required in the 2nd half isn’t happening and that is where the head coach earns his money. I haven’t seen that from Foxe.
What is clear though, is that the players are in it together. There is definitely a bond there in how they celebrate together and encourage one another. We lacked that last season. That bond could take us very far this season.

What a rollercoaster that was…