This week’s Best and Worst sees us endure torrential conditions at the last Sydney Derby at Allianz Stadium in its current form.

Here’s how we’ll be lining up in the Sydney Derby tonight 👊 Thoughts? #WSW #🔴⚫️

Best – Consistent Lineup?
Having a consistent starting XI helps with cohesion, understanding etc between the players. This is obvious with SFC who don’t have many players outside of their 13 main ones. The only change we saw was Baby Baccus moved to right back due to Risdon being suspended. Not sure if this is our best XI but its what Gombau has settled on in recent weeks. Baccus was awol and we think that he is probably receiving #TheTreatment. Herd allegedly flew to England due to personal reasons. Our midfield lacks steel and Herd in my head solves that problem. But he has been in and out of the squad under Gombau so its anyone’s guess if he sticks around for the 2nd year in his contract.

Riera scores for the 4th game in a row. A lovely ball over the top by Carrusca and Llorente latches onto it. A mistake by Redmayne and Riera slots it home into an open net. But looking earlier in the move, Riera actually wins the ball in our own half, holds it up and gives it to Roly to start the attacking move. He then is there in the 6 yard box to finish it off.
The guy is a workhorse and the best player in the squad this season. I’ve said it before and I’ll say it again. He works so hard off the ball and comes deep to get involved and kick start things. If only the midfield were doing their job and he didn’t have to drop so deep so often.
Let’s not forget the defensive work he does. Many defending set pieces are cleared by his head. He gets back when needed and helps with all defensive efforts. No one can fault his commitment or ability. I’ve seen it questioned by some people online. You are blind if you don’t think he is our best player.
Riera is the best attacker and defender we have right now.

Worst – Vintage Pre Half Time Square Up
Lazy defending by Thwaite to give Ninkovic an excuse to go to ground. Peter Green obliges like #AleagueRefs do every week. SFC can’t go into the break a goal down! Its incomprehensible. Every single person around me, me included, knew Adrian was going to score from the resulting free kick. It was gifted to him. From this moment on, SFC dominated and controlled the match. From my limited viewpoint it seemed SFC were getting the favourable calls. Blow in their direction, freekick. Get chopped by them, play on. Standard A-League game.
I’m actually really surprised that Simon’s dive wasn’t awarded a penalty.

The icing on the cake for @SydneyFC.

But how about that assist? 😍😍😍

The aforementioned Thwaite attempt on Ninkovic and basically all 3 goals by SFC were due to comical and inept defending by WSW. A ball in the box and Carrusca opts to chest it instead of clearing it, allowing Simon to knock it to Adrian to put it away. Roly passes to no one when he’s in his own defensive corner which goes directly to Ninkovic who draws all players and Bobo waltzes on by unchecked to score the 3rd. Its schoolboy error stuff. It also explains why we are in 6th place. You can’t give teams this many opportunities to punish you.

Worst – Conditions Favour Sky Blues
Was discussing the conditions with the wife on our way to the match and I said these conditions favour Sydney’s press and thug midfield to quick counter attacks more so than a team like WSW who wants to play the ball along the deck. The result and the game itself shows I was somewhat correct. Once Sydney were leading, they were extremely compact, with 7 or more players sitting deep with no space between them. WSW had no ideas how to break it down and when SFC double teamed a player they won the ball and hit fast on the counter.
I don’t understand why we didn’t use the conditions in our favour around the box and have low shots that would skim along the surface and test Redmayne. He really didn’t have to do much all game.

Adrian Mierzejewski is Round 21’s Player of the Round.

One is supposedly under the cap, the other costs over $1 Million. One starts every week and its Man of the Match most times. One scores from a freekick, the other kicks it straight into the wall. One is extremely good value for money, the other is not.
If Cejudo the new Jumpei in my mind? (ie the player I single out). Perhaps. We expected so much from this player. He had 30 minutes to do something and he kicked a freekick into a wall and had a shot that went straight at Redmayne. Compare that to Adrian who got a brace and is clearly the best player in the league this season. Its not even close.

Worst – Lowest SFS Derby Crowd
Talked about it last week, its been debated for weeks leading up to this match. The Sydney Derby was scheduled for a Sunday purely so Foxsports can have the exclusive rights to it. They moved the kickoff 30 minutes earlier to 6:30pm which isn’t going to make any difference to those with young families or have to wake up extremely early for work the next day. It was always going to be a low crowd based on that alone. Throw in the ridiculous high ticket prices and it adds another factor and reason for people to avoid going.
If the lowest ever derby crowd at Allianz isn’t enough for those in power to realise they are doing it wrong, then I don’t know what is.
The torrential rain was just another factor and would have stopped any potential last minute walk ups. 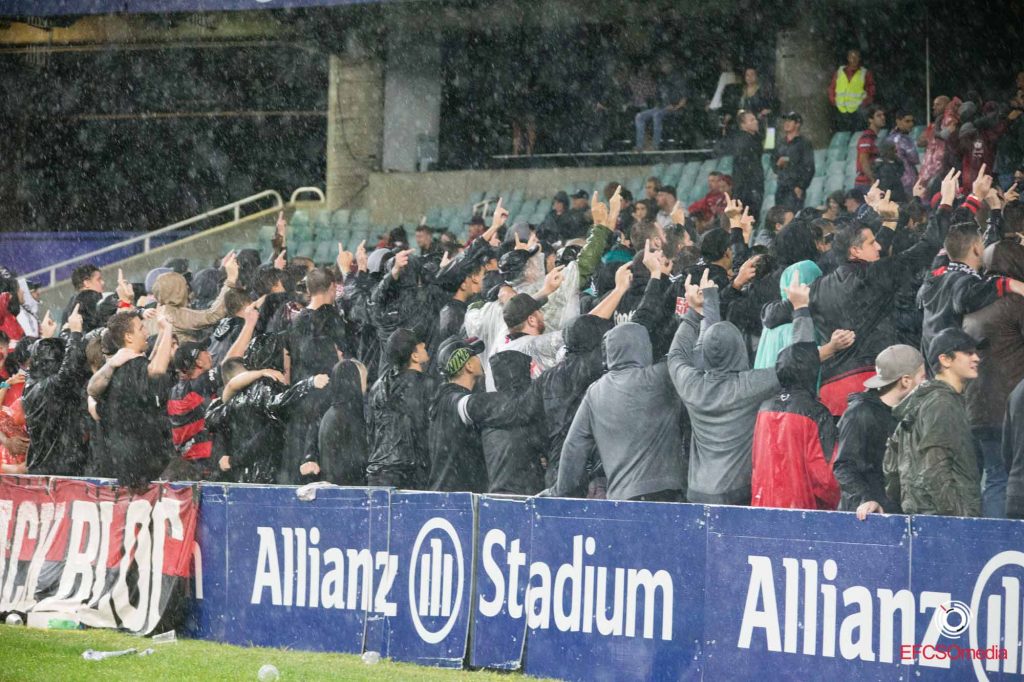 Best – Everyone That Got Drenched
Props to everyone that went to the game though. We were all soaked by the time we got to the stadium and as the night wore on it got colder and more miserable. Those that stood in that rain deserve all the plaudits. We showed more passion than half the team and were rewarded with that 2nd half performance. Its no wonder the bays empty right on full time. That hot shower was the greatest thing all weekend.

Best – No More Moore Park Trips
At least we don’t have to go back to Moore Park any time soon. The stadium is desperate for an overhaul. Its unsafe, there’s like one exit that everyone crams though when leaving. We thought it would be a good idea to take the bus back to Central instead of walking. But crowd management in this city leaves a lot to be desired, having one long line in the mud and one shelter open for people to board busses. Its dumb and just slows down the entire process. Who knows where all future derbies will be. I wouldn’t be surprised if all 3 of them are at ANZ next season. Expect worse crowds if ticket prices remain the same.

Highlights. Yes, FFA actually have a YouTube channel and uploads highlights every week. Did anyone know this? The views on these videos are extremely low so I don’t think anyone knows they exist.