Welcome to another edition of the Best and Worst series of post game articles. The A-League has finally returned and first up we faced Perth Glory at home in the final fixture of Round 1.

Hit those share buttons if you enjoy what you’re reading.

Best – Expected strong starting XI
As expected, caretaker coach Hayden Foxe didn’t bring in wholesale changes to the team. The team has been preparing for 15 weeks and they knew what was required. It was pleasing to see Raul Llorente (aka Pacho from Netflix series Narcos) and Alvaro Cejudo finally getting a start. All 5 VISA players started and that’s what you hope with these signings.

Best – Riera scores again
Riera now has 5 goals in 4 competitive fixtures with the Wanderers (4 in the FFA Cup, 1 in the A-League). He has scored on debut in both competitions. This time he scored with his foot so he isn’t a one-trick pony. Was a nice ball from his mate Cejudo that he tucked away under Reddy. Strong in the air, holding the play up, involving his midfielders and always an option in the box or out wide. I’m starting to accept that he is a good signing and will bag a tonne of goals for us this season. Should have had a double with that cheeky lob over everyone from Herd but he relieved a lot of pressure from the team and the fans with the opening goal. His understanding with those around him will only get better as the season progresses.

The Spaniards combine for our first of the @ALeague 2017/18 season 🇪🇸 📹@FOXFOOTBALL #WSW #WSWvPER pic.twitter.com/WnaJ9NHEdE

Worst – Letting Perth back into it
2-0 up at half time and we all thought that if we continue like this in the 2nd half then we’ll walk away with an easy win. Unfortunately the last 25 minutes or so had Perth controlling large portions of the match and had the WSW defence on the back foot. Perth were gifted a goal from an unlucky deflection and the momentum shifted even more. A few of the players looked gassed by the 70th, such as Herd and Cejudo. So hopefully this gets rectified in the coming weeks because you have to finish teams off and close games as strongly as you start them to be a real contender.

Worst – Leaving dangerous players unmarked
A continuation of the above. Keogh had a free header around the penalty spot which he actually headed off target into Hamill’s leg that deflected in. But what is worrying is that someone of Keogh’s ability was left completely unmarked in the box. The defence was solid up until that point and possibly the tired legs and minds caused this lapse in concentration which led to Perth’s fightback.

Best – Resolute Defence
Having said all that, for the majority of the game, the entire team defended as one. Decent saves from Vedran and the entire backline putting their bodies on the line to block shots or crosses. It was WSW of old. All in it together for the common cause. Herd and Baccus, along with Roly all did their part as well as the front 3. Was really a team effort which was good to see. Maybe all those lunches together and a few trips up the coast has really brought the players together and they feel like a team again. 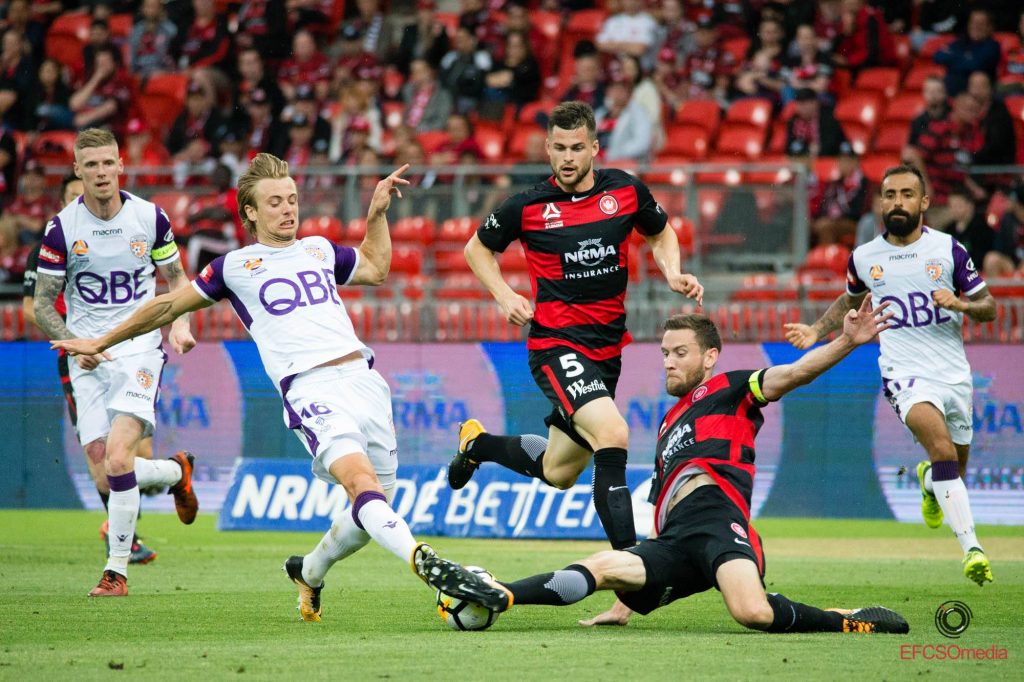 Best – Hamill + Jumpei = What?
Who wouldathunkit. Hamill actually had a good game. He got forward a few times also had his fair share of good defensive headers and interceptions. Him combining with Jumpei was bizarro world stuff. Jumpei actually shooting with his first touch left me speechless. He had a good game also, but don’t get too ahead of yourselves! He started last season well too. Someone really needs to tell him that he is allowed to use his left foot to kick the ball though. I’m not going to fault his effort. He ran up and down the pitch so many times, especially in the first half, trying to get behind the defence. Once Jumpei learns to release the ball one touch earlier, he’ll create more assists.

Best – RBB and WST = one goal
The Who Do You Sing For call and response on the 17th minute across the stadium between the RBB and WST will now be one of those moments we’ll all remember. Talks have been going on between the 2 groups in the off season to put differences aside. Its possible that Popovic leaving may have even helped the situation. The WST leader visited the RBB bay afterwards and basically said, we are all here for the same reason, to support the players and the club. This was met with applause, much like the rest of the stadium applauding the earlier WDYSF. WST will remain in their bay but expect to see more collaboration and possibly a united front at away days. We need everyone losing their voices together in a couple weeks when we take over Moore Park again.

Best – Spaniards Shine
All 3 Spaniards had a great game. Cejudo was named Man of the Match in his competitive debut for the club. Llorente, another unknown leading into this game gave many people a S1&2 Polenz vibe as he bombed up and down the left wing all game with unlimited energy. Llorente was always available as an attacking option and did his part defensively also. Cejudo didn’t shy away from any challenges and had a hand in many attacks. Exciting times ahead. Can the 3 Amigos replicate their compatriots of the 2015-16 season? Let’s hope we do a few trophies better. 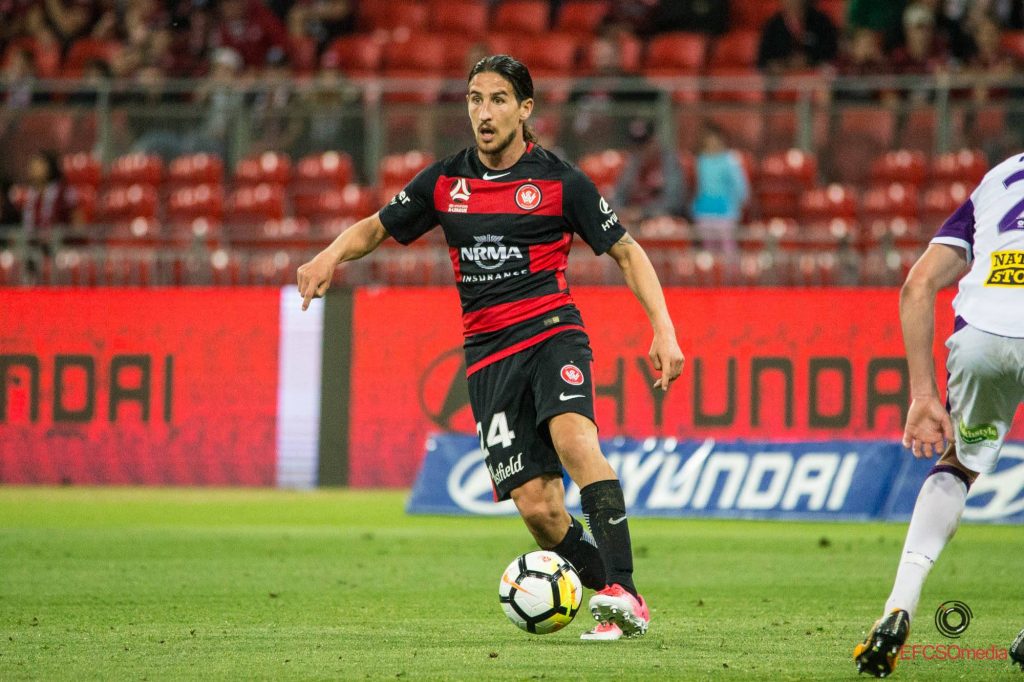 Best – Freedom to Attack
The last couple of years, the Wanderers mantra has been all about possession. Sometimes it was sexy to see, other times it was frustrating as anything as the players tried to walk the ball into the net. This time however it seemed the shackles had been removed and players like Cejudo and Roly were shooting when the option presented itself. Both were unlucky not to get a goal but it was refreshing to see us finally shooting! Another thing I noticed was our transition. Many times we’ve complained how slow we are in transition and we allow the opposition to set up before we try and pass it around them and go back to the Centreback and then try again. The 2nd goal was purely down to Baccus taking his time when possession was won after the 2nd phase of a Perth corner, picking his pass and then the follow on pass to a sprinting Hamill down the right flank led to a goal. There were countless times the team broke with purpose. It was great to see Riera knock the ball down to Roly who would lay it off to a winger quickly. Baccus and Herd didn’t dwell on the ball for no reason and every time we had the ball we ended up in or around the opposition’s box. Playing freely like this, with all that talent on the park, led to the crowd getting into the match. Its much easier to enjoy yourself at the football and at Spotless when the players obviously are.

Worst – Attendance could be better
I’m struggling to find some worsts for this week so here’s a pedantic one. 12,200 odd for our first game of the season with this squad is poor. There I said it. 12k is basically the standard WSW crowd win, lose or draw. I hope people put their unrelenting hate of SOP behind them this season and come and support this team. Its small term pain for long term gain, ie a new stadium. If you don’t turn up for 3 years because of a stadium a couple kms away from Parra, the habit at watching at home has been ingrained within you. Do we really expect 20k people to suddenly appear at Wanderland 2.0? 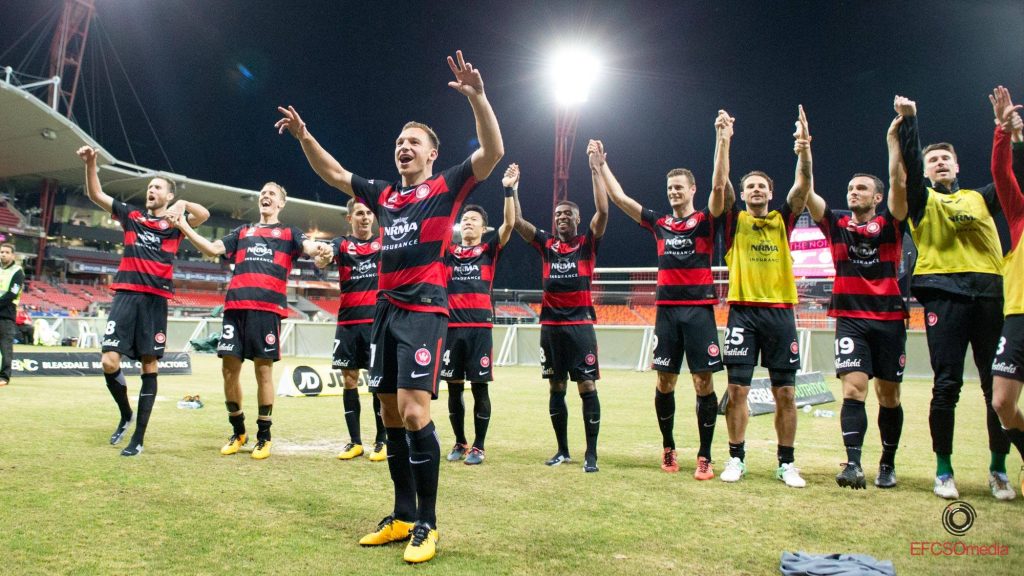 Best – First Round Win
Finally. Finally we win the first game of the season after 6 attempts. Last season, the way Perth came back towards the end of the game they would have gotten a draw at the very least. It was encouraging to see the defence and team hold steady and beat off the barrage towards the end. Captain Cornthwaite has come out and said he challenged the boys to making history with winning the first round. He gets it. He knows what’s at stake with this club and the fans. Challenge accepted and complete.