Welcome to this week’s edition of The Best and Worst series. This time we travelled to Newcastle where the Wanderers have never been beaten.
Hit those share buttons if you enjoy reading these.

Worst? – Bridge as the no.10
I think I get it. Roly Bonevacia was kicked to kingdom come on Tuesday during the FFA Cup Semi Final vs Adelaide. We discussed on last week’s episode whether Hayden Foxe was managing the player’s fitness and workload efficiently and expected some changes coming into this match. I expected Cejudo to be dropped to the bench and Sotirio to come in – the latter made the bench. But Roly was dropped for Bridge to take his spot. Bridge is not a natural no.10 but he works (most of the time). Cejudo is a winger hence why he stayed out wide and with Lustica injured, Bridge was the natural selection here. Just don’t expect any creativity when he is. Thwaite seems to be still out so Hamill solidifies his spot as Cornthwaite’s backup.

Best – First Half Intensity
Seems to be the order of this season so far. The team goes out at full intensity in the opening 30 minutes or so. Its a good tactic if you can take your chances and put a few goals into the net, then you can shut up shop in the second half. It’s exciting to watch and as fans, its nice to see your team take it to the opposition at a venue we’ve never lost. We think “here we go, a good solid 3 points is on the cards”. Unfortunately, all that domination led to just one goal and led to the Wanderers having their work cut out for them to hold on for a draw.

Best – Bridge Goal
Bridge has scored a couple similar goals from similar positions over the years. He didn’t waste his time with this one. The ball came loose and he placed it into the top corner. What shocked me the most though, was Jumpei beating his man and then SHOOTING WITH HIS LEFT FOOT!
What world are we living in? His shot hit the back of a Jets defender and it presented itself for Bridge to score. The commentators couldn’t decide if they should be praising or chastising Jumpei all game. Welcome to our world every week.

Worst – Midfield Injury Ward
This is where it all started falling apart. First Baccus had to be subbed off at the 57th minute mark due to stomach issues then Herd decided to headbutt Topor-Stanley’s shoulder 10 minutes later and came off second best. This forced Foxe to put on Roly and Aspro to replace them. Once this happened, the team lost all shape and cohesion. Its been spoken in the past, but all our attacks start with Baccus. He receives the ball, turns and releases Llorente or Risdon on the wings, or gives it to Roly in front of him. His and Herd’s partnership is already working and appears fluid. Once this makeshift midfield was forced on, Wanderers had nothing. Roly was ineffective and Aspro was lost. It was only a matter of time before Jets scored and dominated the match. Aspro has never played as a defensive mid before and it showed. But what do you do? Push Hamill there but then break that Centre back partnership? Lustica is injured and Melling wasn’t on the bench. Foxe didn’t have many options but the game plan should have changed and WSW should have just shut up shop and parked the bus, getting everyone behind the ball to make it difficult for Jets. We continued to try and play as if nothing had changed, and it backfired.

Worst – Dead Leg Llorente
Late in the first half, Nigel Boogaard clattered into Raul Llorente, kneeing him in the thigh in the process. After that incident, Llorente was done. He soldiered on, but the team lost his bombing runs and outlet on the left and his tracking back. He was vulnerable and the Jets exploited it for their goal. Llorente hasn’t thus far been beaten that easily on his wing but with one leg he couldn’t offer much as the Jets headed the ball over him and he couldn’t chase back.

Best – Vedran (mostly)
Despite not catching the shot that rebounded for Jets’ second goal (may have actually hit his chest), Vedran actually had a good game and probably kept the team in it. He was called upon probably the most all season and he smothered most attempts and caught every cross that came to him. Was let down by his defence for the goal. Watching the replay, you can see Cornthwaite opt to run to the goal line instead of clearing the initial save. Aspro was too slow to get there before Petratos pounced.

Worst – Limited Bench
4 outfield players is simply not enough. It used to be 3 and when the FFA upped it to 4 it helped immensely. It needs to be upped again to at least 5. The bench in this game was: Hall (GK), Sotirio (winger), Santalab (striker), Roly (attacking mid), Aspro (defender).
WSW lost both their defensive mids/centre mids in this game. There were no like for like replacements on the bench at all. The coach chooses the match game squad so should there be questions asked here? Was Baccus not feeling 100% before kickoff and shouldn’t have started? What’s becoming apparent every week is that WSW need a full time coach to deal with these situations. 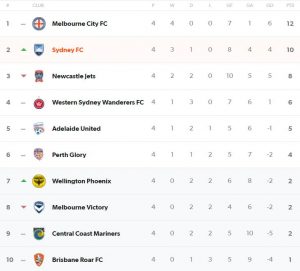 The table after Round 4

Worst – Wandrawers
Foxe is doing an honourable job, but that’s now 3 draws in a row where we mostly dominated the first half and early into the second. We sit in outright 4th, but fans are starting to wonder if this is going to be one of those seasons full of potential with nothing to show for it. A draw is better than a loss, and I commend the team for holding on after all the forced substitutions caused us to lose our shape, but a part of me feels it could have been handled differently with a full time coach. Bridge said its the one that got away, and another week goes by where we should be up 3 goals by half time but aren’t. Why are we losing all momentum and gas by the 60th minute every week?

Best – Week to recover
The positive is, the team’s next game is 8 days away in Melbourne vs the Berisha-less victory. Our first few weeks remaining in NSW is over. Now we go on the road properly and need to put in solid performances for 90 minutes. Llorente should be ok for next week, Baccus should recover from his stomach problems. If Herd was concussed, he may have to be rested. No idea on Thwaite, and Lustica will be out for a while yet.
The team needs to take this time now to regroup and refocus on the games ahead as we’re already 6 points off 1st place.