Welcome to this week’s edition of The Best and Worst series. This time I look back at our Round 5 match with Melbourne Victory on Melbourne Cup Eve where we tried (and failed) to win away to Melbourne since February 2013.

Hit those share buttons if you enjoy my ramblings.

Herd is obviously still recovering from his concussion last week after he headbutted Topor-Stanley’s shoulder. This pushed Bonevacia back alongside Baccus and Bridge at the point. Thwaite, despite being named in the extended squad, was still left out which led Aspro to partner Captain Cornthwaite. Hamill comes in as expected to cover for Risdon who is on international duty.

Best/Worst – Trigger Happy Green
I can’t decide if this is a Best or Worst. But referee Green was all over the place in this match. First he cards Austin within the opening minutes – which on face value WAS warranted. Then he sent him off 20 minutes later – which again was warranted. But he then let Milligan off where everyone else in Australia is saying he probably should have been sent too. Half the Victory squad were carded, Santa gets a card with his first challenge, VAR is used for an eternity. Typical A-League ref performance where inconsistency seems to be the order of the day. I acknowledge that (especially in the first half) all the decisions seemed to be going our way, but it still made my shake my head at how bad it was. We shouldn’t be talking about the ref, yet after every match we can’t help it.

Best – Three Amigos
At this early stage it’s becoming quite clear that our 3 Spanish imports were Popa’s last gift to us. They combined yet again for Riera’s goal. Llorente has been a stand out every week. Cejudo shows class but needs improvement in some areas. He needs to link up better with the rest of the team and his shooting needs to be more clinical, lest he ends up like Nico. A positive is that he is showing frustration and annoyance when things aren’t going his or the team’s way. But he needs to start being an A-League standout, especially with how much he is getting paid. Riera is that number 9 we’ve been searching for since Tomi Juric.

Best – Riera’s head
Unfortunately Riera didn’t score last week so his streak ended. But he responded this week with another signature header. Watch his run and awareness in the box and he just seems so intelligent when it comes to these situations. He watches the defenders continue to the goal line and he holds his run, shuffles to the right and creates a free header into the back of the net. Early on in the FFA Cup run I questioned whether he can get the better of A-League defenders and with 4 goals in 5 A-League games, I can safely say: Yes.

Worst – Get VARked
Another week, another VAR controversy. The fact that Riera had to wait 3 minutes before taking his penalty is an absolute joke. The reason was checking if the yellow card was issued to Rhys Williams correctly? Couldn’t that wait until AFTER the penalty was taken? There is no doubt that the delay affected the spot kick and my wait for a Riera hattrick continues. Thomas saved the attempt, Victory got a morale boost and the rest is history. They spend 3 minutes trying to work out if a yellow card was given correctly, but can’t spend 3 seconds checking to see if a throw in was correct? Victory were given an incorrect throw in, gain a free kick and then score. Get VARked.
(thanks to Copa Tats for the headline)

Best – Marauding Fullbacks
Raul Llorente was Man of the Match. Hamill again had a solid game. The best thing this season has been our marauding fullbacks. Llorente, Risdon and Hamill. They are always open – Llorente especially – and bring a lot of width. We stretched Victory in the first half once they went down to 10 men and the width was crucial here. Its a pity it didn’t continue in the second half.
Llorente has to be considered one of the buys of the season for us. This guy never stops running and even in the 85th minute he is waving his arms around waiting for a ball as he is completely open on the left wing in the final third. The only way to stop this guy is to give him a dead leg.

Congratulations to @_patriraul_ who was named our MOTM last night 👏 #WSW #🔴⚫️

Worst – Bridge the Passenger
Despite his goal last week, Mark Bridge has been a shadow of his former Wanderers self this season. I’m not sure if its due to lack of fitness, lack of Popa motivation or something else. He was anonymous for most of this game and half chances that he would have created and scored in the past went begging. There were a handful of 50/50 challenges that he pulled out of instead of winning the ball or knocking it beyond the committed defender and creating space for himself. He got me screaming at the TV to get him subbed off because he was frustrating the hell out of me. He did get subbed…for Sotirio and the anguish continued.

Worst – Misfiring Midfield
On paper, Baccus, Roly and Bridge seemed solid enough. But we lacked something without Herd doing the dirty work and Roly in a more advanced role. Bonevacia was mostly absent from this game and Baccus played okay but not outstanding like in previous weeks. In our setup, I think Bonevacia works better as the attacking midfielder because we lost something with Bridge there instead. When Santa came on with 20 or so minutes to go for Cejudo, I think we actually went to a flat 4-4-1-1 with Riera a bit deeper than Santa. It wasn’t effective and we had nothing in possession and attack.

Worst – Jumpei Back to Normal
Ugggh. I really don’t want to make a habit of complaining about this guy. But he frustrates me so much. The fact that the commentators continue to praise him when he makes one successful turn as if he is Arjen Robben and state that “this is what he can bring to the competition.” No. No. No. No. I’m amazed that every defender doesn’t just stop him in his tracks as he is extremely easy to read. The guy ONLY uses his right foot (despite last week’s left footed shot). Regardless of which way he turns, its only with his right foot. I’ve heard many times from the commentators “he showed the defender too much of the ball.” No shit. He simply never protects the ball and its always a metre and a half away from his body. His body is never shielding it the way Hersi used to, and he knocks it around with his right foot all match. His left boot must be the cleanest football boot in professional football history. That last turn that the commentators lost their shit over, as well as the official WSW Twitter account, sums him up perfectly. Loses a defender and blindly passes the ball straight to an awaiting opposition defender.

Worst – All Your Draws Belong To Us
It seems we are trying to beat our own record of most draws of the season. This was a game we needed to win to not fall off the pace of the leaders of the competition. We had the perfect opportunity to win this when Victory went down to 10 men, and it seemed it was ours when Riera scored. But then Wanderers happened. We didn’t stretch Victory and we should have played with more pace in that second half to use the man advantage. I’m reading stats that we had 3 shots on target all game, including the goal and penalty. That’s terrible for a team that had a man advantage for over an hour. Our lacklustre second halves are killing us. It was extremely painful in this match. We lacked ideas and allowed Victory back into the match. They actually looked more likely to score. In my mind, we’ve lost 6 points because of draws that we should have won. I’m letting the Jets game slide because of the forced substitutions. Frustrating is an understatement because we know this team can produce so much more. 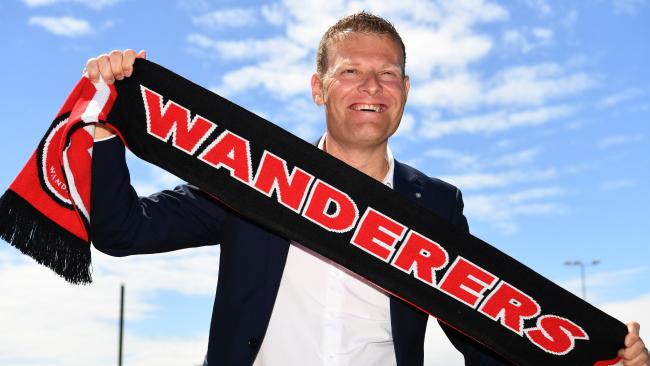 Best – Gombau Era Begins
Josep Gombau has his work cut out for him. He was in the stands watching from up high and I doubt he was happy with what he saw. He says he needs 3 months or more to get his vision across but we need results now. I like that he is going to bring a culture throughout the entire club – from the academy and youth teams to the senior team. We have to thank Hayden Foxe for being thrown in the deep end and remaining undefeated. But for most fans, it seems we lost more points than won. All these draws have felt like losses. Ultimately the blame can be placed on Popa for putting us in this situation but a new era begins this week. Gombau takes over officially and now we see what he can do with this squad. There is enough talent here to be contenders. He needs to get a proper game plan, implement it and make us a 90 minute team. Those are the first steps.
Safe to say, we are all excited to see what he can bring.