This week’s edition of The Best and Worst series comes off the back of our first win in the Gombau era. Hooray.
The Worsts might not outnumber the Bests for once.

Hit the share buttons so I can feel good about myself.


Best – Santa Starts in Time for Xmas
We all saw this lineup and thought…hmmm not bad. Seems an improvement on last week’s selection that’s for sure. Risdon and Llorente both return to their preferred positions. Baby Baccus keeps his spot and old bro on the bench. Baby Baccus must be listening to Gombau well in training and implementing what he wants. He is young. He is a sponge and it seems he is benefiting from this managerial change – earning a Man of the Match performance. Santa forces his way into the starting XI. Bridge returns from injury with Jumpei taking up the other flank.
Cornthwaite apparently missed training on Monday and the rules are, if you miss one session, you’re benched. If you miss two, you’re out of the matchday squad.

Santa, Riera, Scott. What’s going on? One week Riera starts, then Scott starts the derby, then Santa starts the week later. This is how I see it:
Riera #1
Santalab #2
Scott #3

When fit, Riera will always start.
At the derby, he was out injured. The argument I’ve seen is “why not just start Santa in the derby, and get him to play 60-70 minutes?”
Yeah, good question. I guess Gombau obviously thought Santa was better off the bench in the derby so Scott started.
Riera returns from injury this week but can’t start, so Santa starts at Gosford. Gombau knows he has an experienced striker on the bench in Riera and has no problem with Santa starting because of this.

Or for shits and giggles, lets just call this the Gombau Rotation Policy to troll fans and media. You know, because obviously there is a rift in the dressing room *rolls eyes*

Best – Style Shifting
The more games we play, the more we see Gombau’s style being implemented effectively. On last week’s episode, Josh talked about these clusters of three players in various sections of the park. He was live at the stadium on Saturday and paid particular attention to it happening right in front of him. Clusters of players on either wings and the front third, creating 3v3 opportunities. The Centrebacks receiving the ball and shifting it down their side or Baby Baccus taking it down the middle. I need to rewatch the game and pay more attention to this happening but Josh talks in depth about it in his article this week. I did notice that CCM didn’t press as high or as often as Sydney did which afforded us more time to shift the ball around where we wanted.

Best – Spanish Commentary
In February 2013 we were in a minibus travelling to Melbourne to watch us beat Melbourne Victory on our way to become Premiers. Whilst reviewing the previous week’s game on a laptop Iván (pre-ATB) started commentating it in Spanish. Apparently this is something he has done for ages when waiting his turn playing PES as everyone gathered around the TV. We recorded it and it’s probably uploaded somewhere on Soundcloud or on that week’s episode. It then became a thing on ATB. Iván would record Spanish commentary for WSW goals and we’d include it in our episodes. Some were edited to video and are on our YouTube page.

Foxsports contacted Iván through ATB for the opportunity to commentate an entire match on Foxsports. Dream job. It was well received by the vast majority. Even if you don’t understand Spanish it was more entertaining than listening to Brenton Speed and Robbie Slater as the alternative. I watched Iván’s and Federico’s commentary. I understand a tiny bit of it, but I loved that he got to call a couple WSW goals live and for the entire country to hear.

Ivan and Federico on fire.
To go with Miguel on Thursday night… pic.twitter.com/8bJrHwYNjT

Best – Finally, Cejudo and Santa Score
Finally both Cejudo and Santa get the monkey off their back and get their first goals of the season. Somehow Santa’s snuck into the inside post and I think it looked wide until it curled at the last moment. Santa was then provider for Cejudo as he drew a few defenders and laid it on a platter for the Spaniard. Finally he hit the back of the net and celebrated by going straight to Santa. Stats show that WSW had 2 shots on target. That’s all you need. Finally we took our chances. Let’s hope it starts a trend.
Funnily enough, literally 30 seconds prior to Cejudo scoring, Josh texted me saying he was starting to agree with me in terms of the output we’re getting from Cejudo for the money we are paying him. I agreed….but as always whenever I give a player shit, they score. Happens every time. 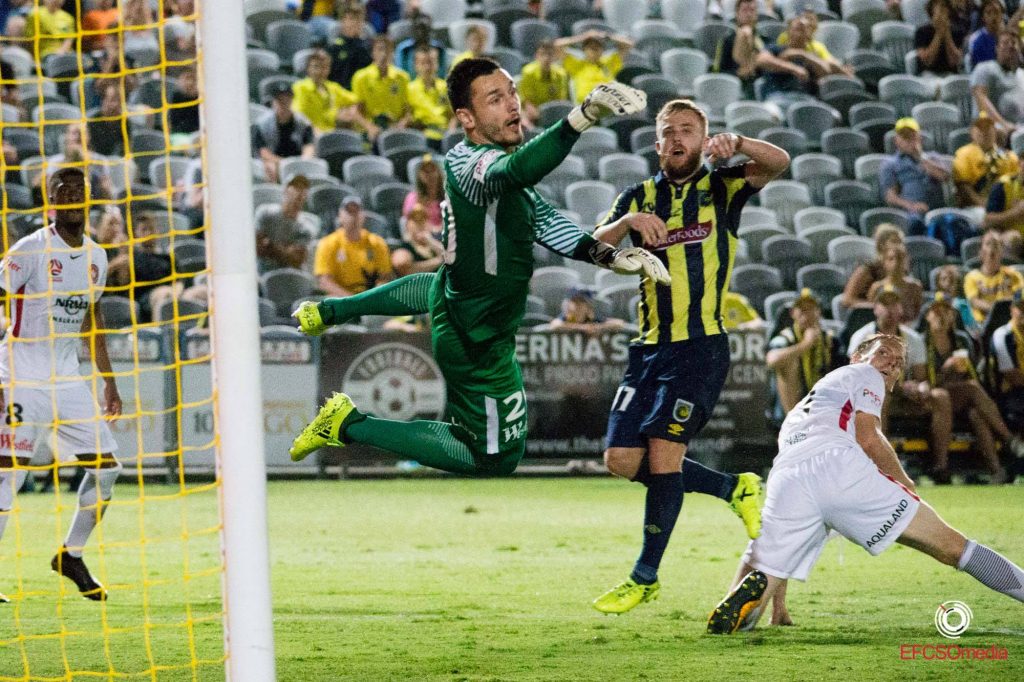 Best – Vedran, Clean Sheet
I have praised Vedran a few times in these articles. However, this was actually his first clean sheet. He earned it with that spectacular save. Vedran is playing a little higher up as Gombau seems to want him to play a bit of a sweeper at times. He hasn’t looked out of his depth. He is always an outlet if the ball has to be switched across and seems rather comfortable in the role.

Worst – VAR’k it OFF
FINALLY the VAR works in WSW favour. And now the world is ending. It seems these decisions that went WSW’s way were the straws that broke the camel’s back.
I’ll be honest, the first one from Brama is a red. He completely scraped Bonevacia’s calf. The issue is not the red, but the fact the ref didn’t think it warranted a red. That is the problem.
The McGing one could have gone either way. I see why it was given red as his studs were up and collected an ankle. But again, shouldn’t the ref see that? We waste 3 minutes after every decision because the ref misses blatant fouls and reds. He gets told something is up, then walks over and Netflix and chills for a bit then decides to show a red. I can see why Okon was frustrated and completely lost for words in his press conference.

Worst – Fans That Don’t Understand Football
This is a personal bugbear of mine. If you want to stay sane, refrain from reading comments on certain social media pages after any game or on any WSW related post.
The amount of comments I read of “disgusting last 15 minutes” and “why didn’t we push hard to score more goals?” and “why were the defence just passing amongst themselves?”
WSW are 2-0 up. Their opponent just got their 2nd red card in the 78th minute and are down to 9 men. You as a player are perplexed with some of these decisions, but the game has to be finished still. What do you do? Instead of kicking your fellow football players when they are down, you continue to play respectfully. Yes, you hold the ball and don’t go for the jugular. What would that prove? That you beat a team with 9 men 4-0? What’s the point? Sometimes there is an unspoken player’s union.

I’ve actually heard something similar when in Italy’s Serie A, if a team goes 4 or 5-0 up, they take the foot off the gas out of respect. This isn’t the EPL where they go for the 7 or 8 goals to lay the boot in and completely disrespect their opponent. Also, the ref doesn’t even play stoppage time. What for? Why do you need 4 minutes of stoppage time when a team is winning 5-0. This actually annoyed me last week at the derby. Would ANY of us be upset if the ref blew right on 90 last week? Of course not. Use your judgement for once refs.

WSW fans should be happy we scored 2 goals, kept a clean sheet and the game was basically won by the 65th minute when Brama was sent off. Anything else is just whinging for whinging sake.
Why go hard when you can save energy for next week’s tough away trip to Newcastle? Makes sense to me. 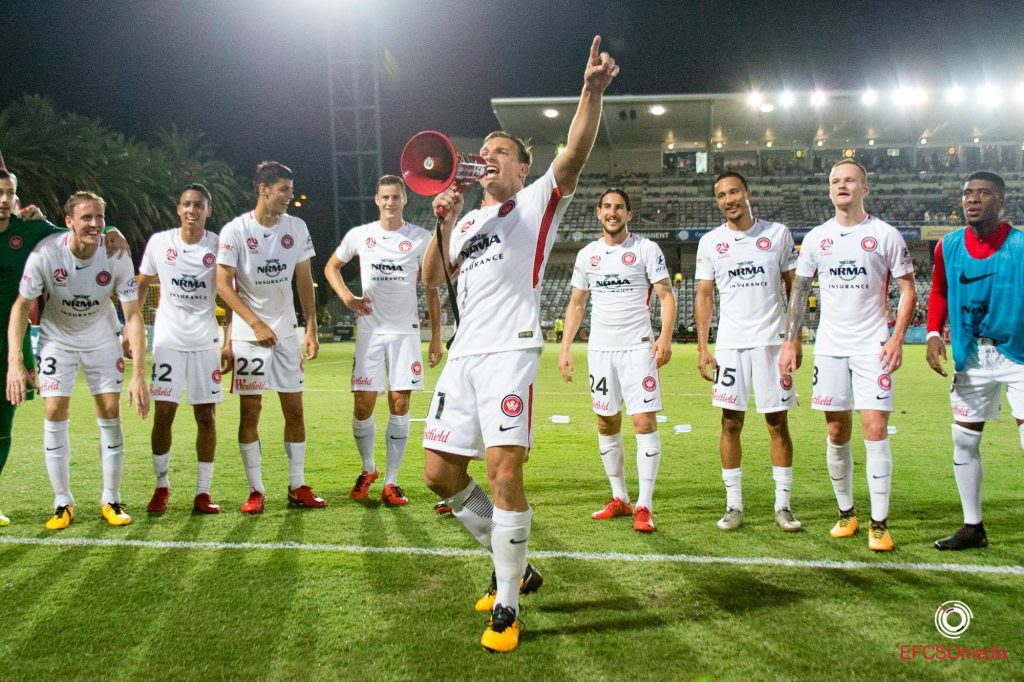 Best – The Only Way Is Up
What better way to respond from a 0-5 thrashing against your cross town rivals than to go away, keep a clean sheet and score 2 goals.
We have moved a whole place up to 8th! But looking at the ladder, 1 more win takes us right into the Top 6 with a game in hand. It’s pretty close in the middle of the table and stringing a few wins back to back will put you right back into the thick of it all. The players are seemingly getting on board with the new Gombau vision and as each week passes the execution will get better and better. It is now up to the players to back up this performance with another strong one away in Newcastle on Friday. 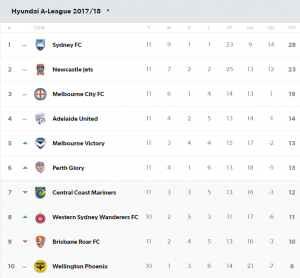