This week the do or die match against Brisbane Roar where both teams are hoping to scrape into the top six.

Best – Bacci Remain
The 2 Baccus brothers remain in midfield as the holding pair and Carrusca returns into the Starting XI. The front 3 is arguably our strongest option and Clisby covers for the suspended Thwaite. Bridge is still out injured and some suggested that could hurt us. Really? He has been pedestrian all season. Cejudo is stronger on the left where he can drift in, drag a defender and Llorente can expose that space created. Carrusca can put in balls behind the lines for Ikonomidis to run onto. Roly is dropped again because he isn’t a defensive mid. It would be interesting to see him play in front of the Bacci like he was doing in the opening rounds of the season but he is either out of favour altogether or has to work to gain a spot on the bench from Lustica.

Best – Riera, Goal Machine
Its a broken record. Riera, the best player on the park again. Forget what so called “expert commentators” say and question why he was getting deep to receive the ball. Riera has been doing that all season. I’ve spoken and written about it countless times. He drops deep, receives the ball and creates an extra man in midfield, releases it and makes his way into the box to finish off the move. Many of his goals have come this way. Someone make a bronze cast of this man’s forehead. The power he generates from headers is amazing, no matter what his body orientation is or where in the box he is.
The hattrick was on and a part of me was glad it didn’t happen because I wasn’t there to see it in person.
Riera has scored the most goals in all competitions (for Wanderers) and has equalled Santa’s 14 in the A-League last season. On top of that, he is now third overall behind Santa and Bridge in all time goalscorers. This is in ONE season. Imagine if he had good and consistent service. He’ll be the leading WSW goal scorer by end of next season at this rate.

Best – Clean Sheet
A rare occurrence and something that should be acknowledged. I don’t remember Brisbane really testing Vedran but they did get behind the defence a few times in the second half when the Wanderers’ intensity dropped. They scored a goal that was correctly ruled offside but if Brisbane had someone younger in the front line they could have done some damage. It’s hard to judge the defence on this game because Brisbane just weren’t clinical like both Melbourne teams were in previous weeks. We kept a clean sheet against a side below us on the table. This should be normal and we shouldn’t get ahead of ourselves too much. 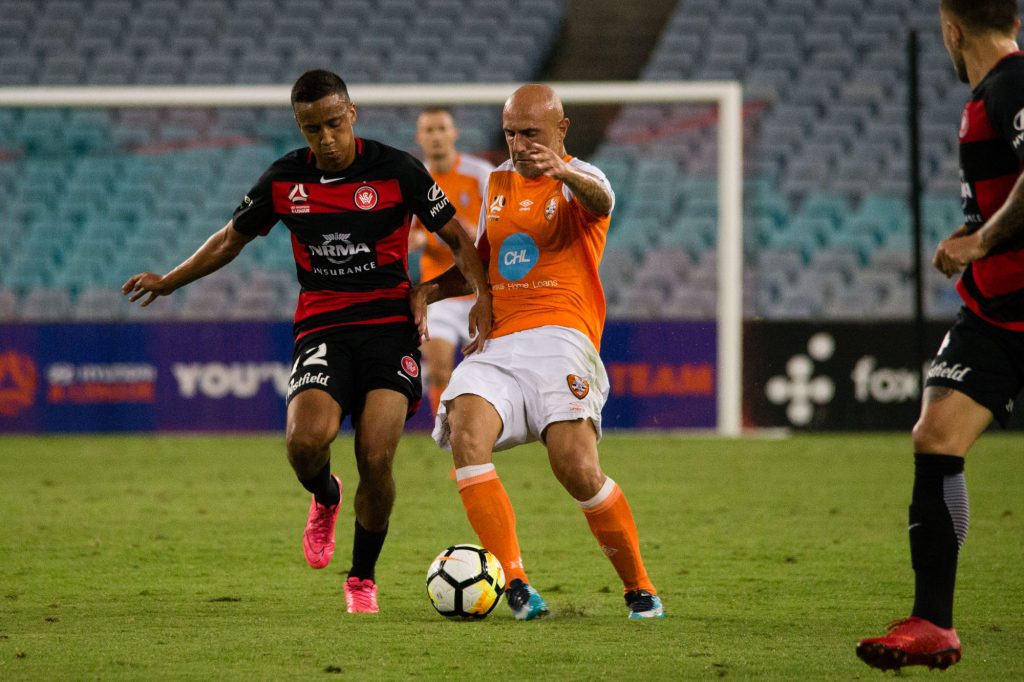 Best – Good First 45
This first 45 minutes mirrored what we saw last week against Melbourne Victory. High press, intensity in midfield and pushing in the final third. The difference was, we took our chances this time and got 3-0 up by half time. It seems the bro duo of the Bacci is working wonders and Gombau has finally realised our defence is weak and needs protection. Playing with one defensive mid (and using Roly who is not the right player to be playing there) was detrimental to the team’s cohesion. Gombau has finally inverted the midfield triangle and we have two defensive mids with OG Baccus pushing a little further forward when required. It worked like clockwork with our firing front line.
But then the second half felt like a training run. The foot was taken off the pedal and we walked most of that 2nd half. We almost allowed Brisbane back into the game and we need to remain switched on for the rest of the season if we want to play a few more weeks. Better sides will claw their way back into the match and I don’t think we’ve ever come from behind this season. We still struggle to score in the second half and these kinds of flaws will be exposed in the knockout stages, if we participate in them.

Worst – Watching From Home
It’s been well documented that the RBB decided to boycott this match for a number of reasons. I opted to remain at home for those reasons because I for one am sick of being scrutinised and feeling threatened by overzealous security and riot squads and anti terror firm Hatamoto for attending a football match for the team I love and helped build before it had a name. My wife doesn’t want to end up on some list with her picture which could jeopardise her career. Her image is her career and if this is threatened because of authorities on power trips and completely misguided, then it is not worth the risk.

I am completely against those that state “you should support the team no matter what” without them understanding why we didn’t attend. I do support the team no matter what. This website is proof of that. If we put aside our issues and simply attend because “the team needs support” then that is enabling those misguided authorities and means we accept what is happening in the terraces against us. No. I’m not going to a game and to go through multiple screening checkpoints, fearing for my safety that I might get banned for swearing or celebrating too hard. We’ve had security guards interrupt us celebrating Santa’s hattrick because we stepped into the aisle and were against the front barrier. It’s worse than VAR when the life is sucked out of the moment because some paid muppet whom asks us “did the season just start” in Round 18 has no understanding of football or human behaviour. This is not ballet.

Don’t use the team playing do or die matches as reasons to put us down. We’ve been there, along with many other fans, through thick and thin, midweek matches, ACL matches, terrible weather, terrible performances, all over the country and all over the world. Now that we’ve had enough of being treated like rubbish and the one time the team starts performing somewhat okay this season, despite being mediocre for large parts of it, we are the bad guys. This is not fair on us or all those fans that have been subjected to the over handed security at SOP and the ineptness of the FFA. The RBB has the smallest percentage of members in comparison to the entire membership base. We’ve been averaging less than 12,000 every home match and that includes the derby so remove that from the equation and it is probably under 10,000. Where are the other 8,000 members? Why are we being blamed for not attending when every other week we all question where all our 18,000 members are?

Leading up to the game, a part of me was thankful that I didn’t have to travel to SOP and deal with this rubbish. But as the day wore on and kickoff drew closer, a part of me was feeling empty inside. It hurt watching from home. It hurt not being there with my friends celebrating a possible Riera hattrick. It hurt not losing my voice. We wanted to be there. But the straw has truly broken the camel’s back. I really do hope the powers that be from all parties do get together in the off season and this is sorted out. Something needs to be done because these past two seasons have been hell and miserable. Every game feels like a chore. Its not fun anymore because SOP is soulless and our reward for attending is going through a gauntlet every match and supporting on egg shells. Dialogue needs to happen because all that anticipation for safe standing at Wanderland 2.0 will be for nothing.

Update. Two of the four in wrong seats. And now asked to move. Random guy in front calls it a Fckn joke and now 3 cops come in and “talk” with him. He’s back. pic.twitter.com/3RoojA3Ho1

Worst – Hard To Judge
Let’s be honest. The only team we’ve beaten in the top 6 is Melbourne City . Sure, this was a great game from WSW but the opposition was terrible. Brisbane didn’t press high at all, their midfield was non existent as we strolled right through unopposed for the majority of the match. Sure we took our chances this time, as opposed to last week, but Riera’s second goal had no challenge from two defenders a couple metres away who just watched the ball go up, put their hands up for offside(?) and the watch him tap it in. It was terrible defending.
Cejudo had a field day and people are calling it his best match. Easy to do when no one is even trying to tackle you.
Whilst the result is good and puts us in pole position for a finals appearance, it was against a lacklustre Brisbane side who didn’t challenge us at all. It’s very hard to judge this performance because next week we take on an Adelaide side who could be trying to keep momentum going now that they can’t get a home final.

A step in the right direction but there’s still plenty to do, insists @GombauJosep #WSW #WSWvBRI pic.twitter.com/1uvAyNrc7q

Best? – Still In The Six
Yay? We’re still in the top 6! Celebrations. We are still in the bottom half of the table. The fact that we are “celebrating” being this mediocre this season is hard to take. We’re scraping into the finals and those that think we’ll do damage in the knockout stage is delusional. We basically have to win 5 games in a row to win the toilet seat, and 3 of those are away to teams we haven’t beaten. Our second half performances still aren’t great and if we go down a goal or 2, I can’t see us equalising or pushing for a winner. The season will extend an extra game but does anyone in their right mind truly believe we’ll make the final, let alone the semis?
Both Melbourne teams are guaranteed to be 3rd and 4th. We have struggled to beat either away from home the past few years (City in 2015 and Victory in 2013). So the odds going down to Melbourne for the first week of the finals is not in our favour. That is, if we get a result against Adelaide next week. Because we play last, we’ll know what needs to be done in order to make the six. We can even come 5th if we annihilate Adelaide.