Welcome to this game’s Best and Worst where the Wanderers attempt to go 3 in a row midweek at SOP. A lot of people are back at work but we somehow got just under 11,000 in attendance. Looked a lot less but that’s because ANZ is a cavern. That would have looked a decent crowd in Wanderland.

Best – Strong Lineup and Subs
The starting lineup is essentially the same as we saw last week but with Bonevacia coming in for Santalab and reverting to the 4-3-3 again. Llorente at right back was a bit more effective this game compared to last, but he needs to get back to his familiar left back position quick smart. The original midfield trio from the start of the season are back together and Grozos makes the bench again – unfortunately didn’t get any minutes.

Best – Baccus is Back, Alright
Baccus should have been given the Man of the Match award by WSW members. He had one of his best games in over a month. Maybe it had something to do with the OG Trio in midfield of himself, Bonevacia and Herd. He linked up well with everyone around him and put Roly through that led to the goal. He was playing the true box to box. KB always seems to find space in a congested midfield to find players around him. He does though, need to work on his shooting and confidence around the box. There were a few occasions where he could have shot but opted to pass, or when he took a shot at goal it wasn’t on target. If he can start scoring the odd goal here and there, he will become even more valuable. His game dropped off a bit when he had to sit deeper late in the game after Lustica and Herd were subbed off.

Jack Clisby with his first ever goal in the @ALeague 😎

Best – Successful Counter Attack
A quick transition, some masterwork by Baccus and it’s a goal. Winning the ball in your own half and finding a team mate making a run is always going to threaten. Its funny how after all this talk about possession football that many of our goals are coming from counter attacks. Clisby made an untracked run all the way from half way. Its his first goal in 90 starts or something. So well done to him.
Teams need to know when to play the quick counter and transition, and when to hold the ball and start again. We’re learning to do both and its more improvement from the players under Gombau.

What a block from @JordanElsey1!

Worst – Missed Chances
Its the curse of the Wanderers. Déjà vu for the past few years it seems. We had enough chances to win this match 4-0. Bridge should have scored a double, Lustica should have scored instead of taking a touch. That inability to take our chances and finish the game off cost us. Make no mistake, Adelaide could have scored 3 goals too and it wouldn’t have surprised me to see the game end 3-3. Adelaide have the best defensive record behind Sydney so it was never going to be easy to score against them, despite them missing a handful of key players for various reasons.
But those missed chances. Frustrating as it was, it is a positive that those chances ARE happening. But they need to be put away. 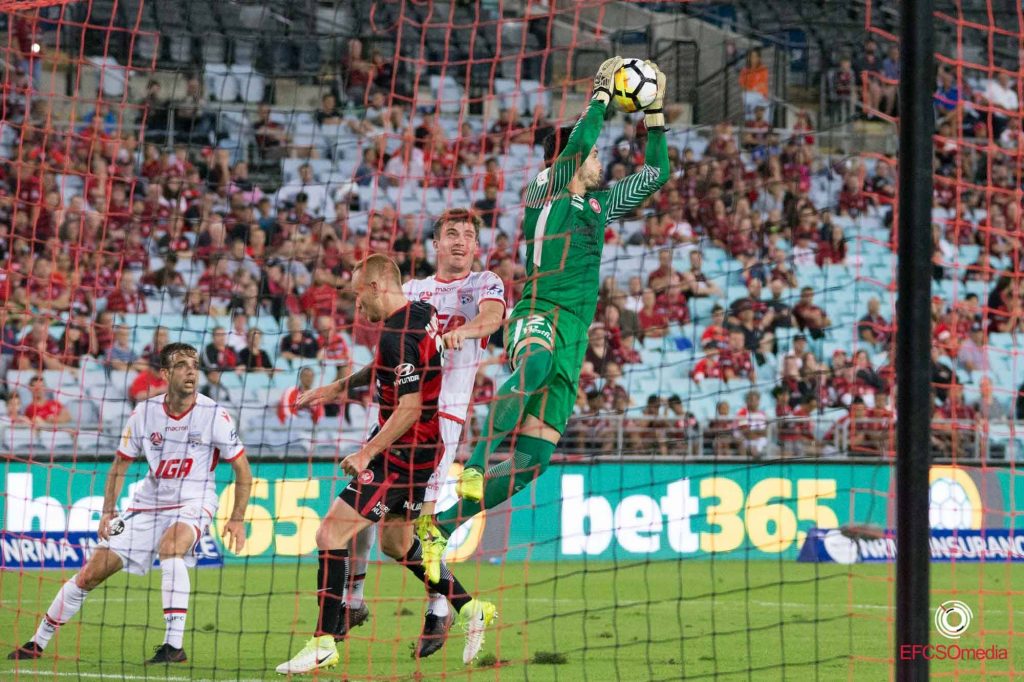 Best – Vedran Again
Vedran has made the most saves in the entire competition. That either means he is good, or his defence in front of him is bad. He obviously is facing a lot more shots than other teams and that is a bad thing. Something needs to be done. But Vedran has truly stepped up under Gombau and is playing that sweeper/keeper role comfortably. He is out of his box to sweep when needed, his distribution is still good with his hands and feet and his shot stopping has saved us on many occasions. I’ve also noticed an improvement in him dealing with crosses. So I can’t really blame him for many of the goals we’ve conceded of late. He is doing his job. Its those in front of him that are letting him down.

The late equaliser ensured a 1-1 draw away to WSW.

Worst – More Ball Watching
The goal WSW conceded was soft. Simple as that. Adelaide can probably say the same thing about the goal WSW scored but to concede on a set piece on effectively the second phase of play was poor, especially so late in the game. The goal scorer ran between both Centrebacks unchecked to smash it home from 2 yards out. That is inexcusable. Especially after the game both Cornthwaite and Thwaite had in cutting out a multitude of crosses all game. The last few week’s I’ve complained about the ball watching in the box and it happened here again. You can’t let any opposition player run around in the box unmarked.
In this game however, something was going to give eventually, especially as Adelaide applied the pressure for the final 20 minutes.
Still, it was 2 points lost.

Worst – Backfiring Coaching Decisions
At the game, I was surprised with some of the substitutions. Especially when we were winning 1-0. Gombau appeared to be chasing the cushion of 2-0 when he brought on Scott for Herd. Then Santa was subbed on for Bonevacia and again we had effectively 4 strikers on. But it appeared we lost the midfield during this time. Hamill was brought on to replace Lustica as he is more defensively minded.
Did the subs lose us 2 points? Gombau doesn’t think so. He explained that Herd was struggling, as he hasn’t played much football for 6 or so weeks, and was on yellow. Lustica similarly. I can see what Gombau is saying, but should he have shored up the midfield instead of chasing another goal that we didn’t really need?
Its also worth noting that we conceded at a set piece where formations don’t mean anything. It was a soft goal to concede and as mentioned, Adelaide were pushing hard for the goal with multiple corners in succession. It was only a matter of time.

Worst – Back It Up in 3 Days
Thanks to FFA scheduling, we have to cross the ditch and take, for the first time this season, on a Wellington Phoenix team that beat a 10-man Melbourne Victory, on Saturday night – 3 days after this game.
This will be without Cornthwaite and Herd due to suspension – That Cornthwaite yellow was a joke – Cejudo is expected to be injured still. Risdon is tipped to come back and now suddenly we have Carrusca ready made and on the plane. Also the Socceroo under23s are missing. Squad depth will be tested with a short recovery time. One wonders if Riera can go 90 minutes again. If he can, how fit is he! He does a lot of running off the ball and drops deep so many times to spark attacks. Almost worthy of his own Best again this week.
Expect to see some surprises in the lineup and subs bench. Expect to see Hamill come in next to Thwaite as the most obvious. Let’s hope the boys can recover and try to get the 3 points on the weekend.

Our undefeated start to 2018 continued last night against Adelaide.

Best – Undefeated in 2018
#CalendarYearStats
This game was a real test for the team to see if they could back it up after 2 straight wins. We could have won the match with all the chances we missed but it could also have been 3-3. Unfortunate not to gain real ground on Adelaide and Victory but at least we were competitive again against another top 6 side and could have won it. Adelaide were missing a few key players (but so were we) and the fixtures are coming in thick and fast for all teams (except Sydney FC). We again saw signs of improvement from Gombau’s team but question marks are being raised over his aggressive substitutions. But if we went on to win 2-0 or 3-0 no one would be questioning them. That’s football.