The build up to the Wanderers debut in the Asian Champions League has been long coming and for many it felt like Round 1, 2012. The game was expected to be a hot contest and the weather during the day was equally fitting. However, night descended and with it came the rain and 12,000 people to Parramatta Stadium to see our historic first outing in the pinnacle of our sport in our region.

I rode my bike to the stadium and after locking it up on a light pole behind the stadium at Parramatta Park I walked towards the vibrant atmosphere that awaited me. As I walked in I could see the immense TIFO that the RBB had made. The message was clear, “Fear None, Conquer All”, and it summed up perfectly my expectations. I grabbed my Dino two-stick and got straight into the chanting. It was just a few moments before I was celebrating as Santalab slotted home one of the best goals we have ever scored. The mood was ripe and it really felt like the Wanderers had indeed come to conquer all. 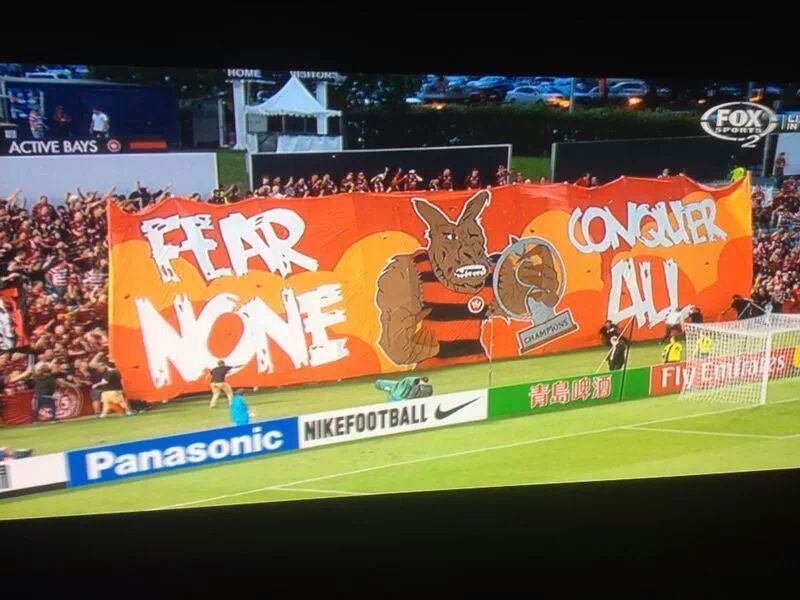 Standing about four rows from the front in Bay 55, I could see that this was some of the best football I had seen being played at Parramatta Stadium and it was being executed by both teams. The play was quick, tactical and enthralling. With a distinctive pop came the equaliser and the RBB lifted, mumbles of the “talking point” could already be heard and regulars and newbies focused on drinks orders and chatting to the pretty girls instead of supporting our team.

I was furious with some of the behaviour going on around me, but I just chanted on and continued to watch Ulsan completely absorb our attacks. I felt that we were holding our own and that a result was very achievable, but just before half time they went ahead and a sense of hopelessness seemed to settle in. It didn’t seem to bother some around me who were mid conversations, planning their drinks orders and having a bit of a chinwag. I tried to pump them up with a huge yell of “COME ON!”, only to receive a “Calm down bro” response from one of them. I must have interrupted his conversation…the half-time whistle went. 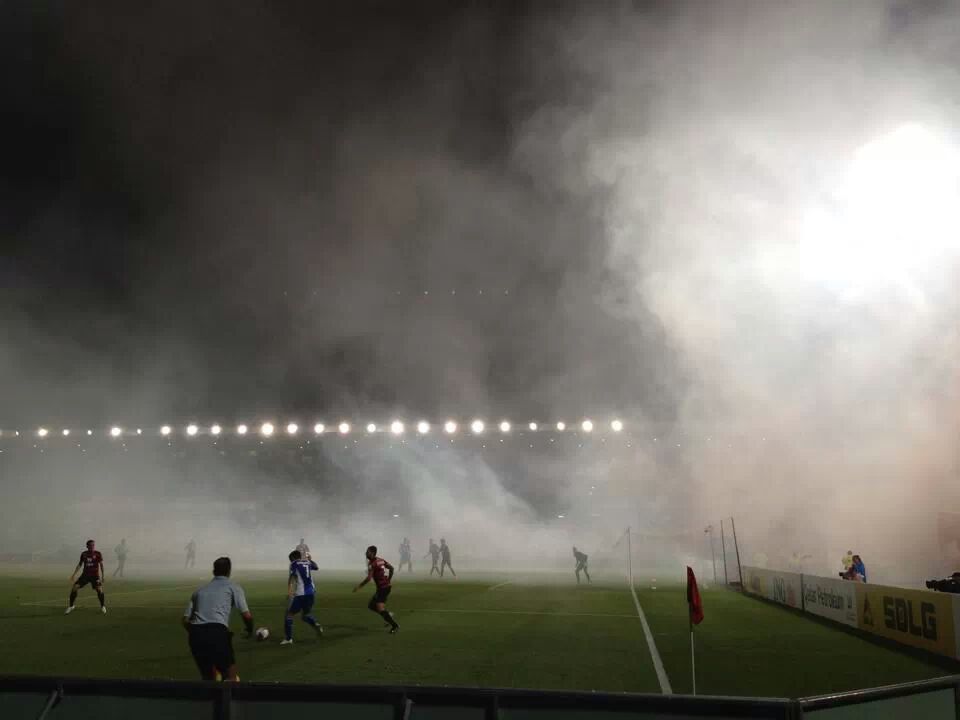 Smoke lingers in the air. Credit to Photos From Wanderland – www.facebook.com/everydayimwandering

Infuriated I took up my old spot, from last season, in Bay 56 with La Banda. I felt good and knew that here I was sure to get that atmosphere I work so hard to reproduce. Little behold it was not much better. Bay 56 deep and I had the equivalent of a Craig Foster next to me with his incessant match analysis. I did not bother with it and just chanted on. It was all around me though and it was hard to keep on chanting with so many around me lifeless. Ulsan continued to hold well, and we attacked hard down the right. The goal would not come and the frustration started to settle in, both on the park and in the stands. The Capo’s looked defeated and as did most regulars I could see. We chanted on though and saw out a 3-1 loss.

The Koreans, in their pre-season, demonstrated just how superior the K-League is to our A-League. I thought the Ulsan coach summed it up perfectly in the post-match press conference stating that the Wanderers “have a good physical ability but they only like to play an aerial game…given the good quality of grass condition, if they played a low, passing game, Australian football would be more competitive”. I thought his statement summed up perfectly the state not only of the Wanderers, but Australian football in general.

Our strong physical game gives us an edge ahead of most Asian competitors, if we could only bring up our tactical game then we would have a real chance of being big-boys in Asia and not only as Wanderers but as Australians. The Koreans and Japanese have invested heavily in South American coaching talents to develop their game and this is something I feel we should be looking to implement here to narrow the footballing gap.

Many times it has been noted that previous Australian teams in the ACL have not given it the respect it deserves. The Wanderers vowed this would not be the case in Western Sydney. Popovic proved that by resting our best players during the weekend when he played mostly a second string side and reserved what most would agree is our best team for our encounter with Ulsan. The boys gave it their best but it just wasn’t going to happen on the night. The RBB put on one of the most audacious displays ever attempted in Australia and 12,000 turned out to support in dire mid-week conditions.

However, the RBB was full of passenger, rather than active, fans. It has been for a while now. The reason that these fans continue to soak the atmosphere instead of creating it is simple; these are the cheapest tickets. Yet people drain the incredible environment instead of adding to it. Thus leaving the rest of us working twice as hard carrying so much dead weight. If you attend the games in the Northern End, then you need to have an honest and critical look at your performance. You know if you’re as active as is expected of you. If it’s not for you or you can’t keep up then head to the ends of the Northern end and consider buying South End tickets next season. They are just as cheap and have a great view of the field and the RBB.

It was a good outing, and if a couple of calls or bounces had of gone our way then a better result would have been possible. I wouldn’t say we got completely outplayed but we did get a lecture on tactical play. Win or lose, the ACL is an important competition and we must continue to pay it the respect it deserves. We need to step it up both on the park and in the stands. As for myself, I got back on my bike to ride home and full stacked it riding through Parramatta Park. I felt it a fitting end to the day as I just got back on my bike and rode on.