New season, new format to disassociate from shameless appropriators. Welcome to ⭐ Gold Stars (good) and  🔴Red Cards (bad) as I look at a firey #SydneyDerby.

Don’t forget to hit those share buttons, check out all the previous Best and Worst format, the new Gold Stars and Red Cards format and subscribe to the podcast

⭐Capitano Duke Leading by Example
Apart from the thunderous goal which won us the game, Duke was all over the park, putting in the hard yards. I don’t think there was any inch of the pitch he did not cover. Whether it was gut busting runs in the 92nd minute for a ball he was never going to get to, or chasing back and defending like his life depended on it. Especially when Mo Adam came on, Duke dropped back and was almost another Defensive Midfielder for us.
That’s a leader who never gives up, lifts the rest of the team around him, and is proving every week why he was selected as the captain in the first place. His enthusiasm and intensity is getting reciprocated by his teammates and because of that, we are grinding out results. 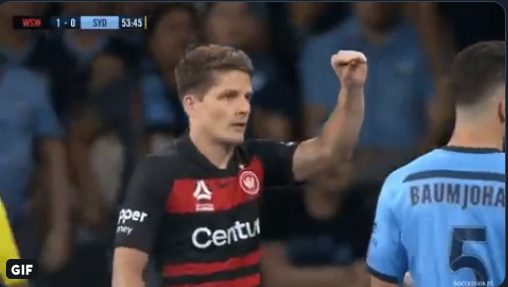 ⭐No Nonsense Schwegler
I’ve said it before, I’ll say it again. Pirmin Schwegler will be our most important signing this season. He steadies the ship, he breaks up play, he makes game saving tackles and he gets into the opponent’s heads. A true professional, he knows how to walk the tightrope with the referee. The image of him hand talking to half the SFC squad will live in our minds for a very long time.

⭐Daniel Farken Lopar
A player who will contest Schwegler as the signing of the season. Again, I have to highlight Lopar’s man of the match performance as key to victory. They say a good goalkeeper wins you a bunch of points every season (or loses you points, see: Janjetovic, Vedran 2018/19), and Lopar has already won us a handful of points, and it is only round 3.
What more can be said about a man with lightning reflexes, amazing positioning and a desire to emulate Gandalf against the Balrog of Moria.
The only worrying thing for me, is that he HAS to keep making these saves. The defensive pairing of McGowen and Jurman had a great game, as did everyone around them, but you can’t keep relying on your goalkeeper to keep the opposition out every week.

🔴Riding Our Luck
Had to put in at least one red card this week. Following on from the above, there is no denying that WSW got lucky a few times. Babbel acknowledged it in the post game press conference also. There were elements of luck in the win. We gave up a heap of possession and tried to hit SFC on the counter. It worked once, but the rest of the game we were holding on for dear life. Babbel mentioned it wasn’t how we want to be playing and there is a tonne of improvement ahead of us, which is a positive thing to hear. There’s only so much luck you can ride throughout the season, so these improvements will be important, and the players coming into the squad in the coming weeks will be key also.
It was nice however to witness a never say die Wanderers team again as they defended as a team to the end.

⭐(B)ref of Fresh Air
Alireza Faghihi is arguably the A-League signing of the season. No nonsense, not intimidated and let’s the game flow. He isn’t quick to dish out the cards that many #AleagueRefs are prone to do so. But when he wants to stamp his authority, he does so. Let’s hope he raises the standard across the competition but it was nice to have a derby where we weren’t really discussing the ref making the headlines yet again.
Funnily enough, it was almost 5 years to the day where he officiated a similar match with a similar result where WSW took their one chance and held out the opposition.
His uncompromising self clearly didn’t get the memo regarding SFC favourable decisions.

⭐Your Tears Are So Sweet
Seeing Corica lose his absolute mind when VAR ruled the ball did not go over the line was the highlight. Seeing SFC fans on social media lose their minds over the call because they don’t understand perspective was even better. Even their most avid fan, Robbie Slater, who was adamant the ball went over the line during the game, ended up convincing himself that it didn’t post game during his little experiment. It was hilarious watching him sheepishly backtrack on his “100% sure it went over” stance as he realised the camera angles confused him. The first angle used was actually the most square and made it seem even more obvious the entirety of the ball did not cross the line. Lopar’s feet were also on the goalline and he didn’t reach back to pick the ball up.

But one “contentious” call goes against them and the entire SFC fanbase loses their mind. Everywhere else in A-League land fans are rejoicing to see SFC for once not get favourable calls go their way. Call me bitter or blind but WSW have basically had dodgy calls go against us almost every single derby over the past few years. To name a few:
– Ibini standing in front of Covic in an offside position, ruled as not interfering in play and the goal stands
– Sotirio headed goal at half time ruled offside – he was on
– Zullo handballing the ball in his own box, ball goes out and is ruled a goal kick…?
– Sotirio ruled offside because Grant ran into him
– Carney diving to win a penalty
– Rhyan Grant committing multiple yellow card offences every game and getting away scot free

I’m sure I’ve missed a bunch.

VAR ruled on the ball and the handball pretty quickly, so it was hardly contentious in their mind.
Welcome to the A-League the last few years, Sydney FC fans.
Don’t @ me.

⭐3 from 3
This is the main stat to take from all this. Three wins from the opening three games. Never been done before by a Wanderers side and now we sit alone at the top of the table. Not getting ahead of ourselves – as Babbel stated in the presser: the competition isn’t won after 3 rounds – but we’ve now beaten two of our bogey teams in successive weeks. The entire club say there’s heaps of improvement ahead of us and we’re nowhere where we want to be. At least they are acknowledging the weaknesses and aren’t resting on their laurels and getting ahead of themselves. Winning ugly is what championship winning teams need to do sometimes – somehow get the 3 points, no matter what. We lost these games last season, but this season the experience within the side is helping us get over the line, and they are teaching the young guns that mentality too.

"The fans were amazing"

PS ⭐Police Presence
A short note to say the first time I saw the riot squad was outside the stadium after the game (apart from the horses during the march). Didn’t see them at all during the game or in the stadium. That’s the way it should be. Their presence doesn’t have to be front and centre. They don’t need to patrol the aisles which intimidates and antagonises fans. Let’s hope this more positive approach continues as the season progresses.