On this week’s podcast we talked about the problems active support is facing nationwide. We have seen what has happened in Adelaide and what is now happening in Melbourne. It’s disappointing to see that so many people do not take this seriously. I’ve been hearing people actually say that this was not our issue, however I strongly disagree.

We must not allow a precedent to be established which can then be used against us. Sure these rival active supporter groups are just that, our rivals, but at the end of the day we all need each other to co-exist to continue creating a great atmosphere for the entire league.

As a Sydney FC fan I applaud Police targeting Melb Victory/ Wanderers Fans. As Eddie Murphy said n Delirious U brought this shit on yourself

It saddens me that in this day and age, as humans, having seen and learnt so much through history that we can still have these individualistic approaches to issues which affect all of society. Growing up I was taught to always respect and defend those around me because you never know when you will need help.

This Tweet by @Bruza7 is more along the lines of what we should be aiming for. If you follow the Ch.9 news tweet you’ll be happy to hear that only five arrests were made and that the crowd was well behaved. It blows me away that the media can be so biased and no one seems to see it, or worse yet no one cares. I hear many people say “if you’re not doing anything wrong then you have nothing to worry about”, yet history shows us that yes we have a lot to worry about. Being surrounded by police who are armed to teeth is not the concept of safety I was brought up to live in. 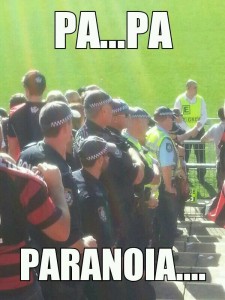 As I said in the podcast this week, if it is a few bad apples you’re going for then so be it. But the tactics and strategies we have seen being put in place do not speak of going after individuals. Rather they are a targeted attack on an entire group of people.

The fact of the matter is that we are being intimidated by police. They are pushing us into a corner and somebody is going to react in a manner which police will feel threatened by. Unfortunately it will more than likely be some kid who freaks out. Now this is not me just ranting for the sake of ranting, UK expert Professor Clifford Stott, was interviewed by @shewritesme and he warned the FFA “against heavy-handed policing” towards active support.

“But what we find in our work is that effective crowd management policies…revolve around dialogue and communication, building relationships with fans and that includes those who are problematic. It’s not so much the control of disorderly behaviour but the facilitation of orderly behaviour.” 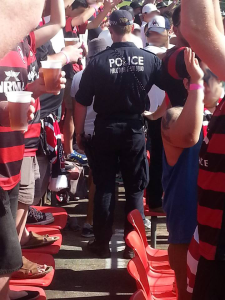 This photo was taken at the Western Sydney Wanderers vs Adelaide United pre-season friendly match at Centrebet Stadium in Penrith. Can someone explain to me:

At the end of the day we are going to continue going to the games and having a shitload of fun being part of the RBB. If only the Police could calm down and get some appropriate training in regards to what is actually happening on the terraces than none of this would be happening. To those that still think this is Melbourne’s problem and we shouldn’t get involved…wake up because it’s already happening.